It was in the early 1830's in Missouri, that the Mormon Missionaries came to the areas in Missouri where the Ivies lived. Parley P. Pratt was one of the elders who came so often to their homes. It was he who brought the Book of Mormon to them and taught them the gospel, which converted them. He also helped to baptize them as members of the Church of Latter-Day Saints. Thereafter, their homes were always homes for the traveling missionaries.

Business card of the Union Hotel in Kirksville, Mo. (also known as the Ivie Hotel), run by William Shelton Ivie until he died, and then was continued to be run by his wife for many years. It was located on the NW corner of the intersection of Franklin and Harrison Streets, on the town square in Kirksville, Missouri (the location where later a J. C. Penney Store was built). 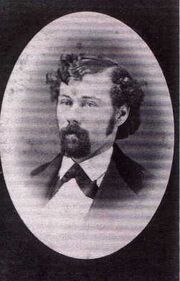