William Bradford was a passenger on the Mayflower in 1620. He travelled to the New World to live in religious freedom. He became the second Governor of Plymouth Colony and served for over 30 years. Bradford kept a journal of the history of the early life in Plymouth Colony. It is called Of Plymouth Plantation.

Bradford was born to William Bradford (1564-1591) and Alice Hanson (1562-1697) in Austerfield, Yorkshire, England. His family were farmers. The Bradford family owned a large farm and were considered rich.

His uncles wanted Bradford to help on the farm but Bradford was ill and was not able to work. Bradford started to read many books. One of the books was the Bible. This may be where he started learning of a religion that was different from the church of England.

Scrooby Separatists were a mixed congregation of early English Protestants / non-conformists founding living in the border region of of South Yorkshire, Lincolnshire and Nottinghamshire. They were called "Separatists" because of their rebellion against the religious authority of the Church of England, the official state religion. In 1607/8 the Congregation emigrated to Netherlands in search of the freedom to worship as they chose. Shortly after that they were the basis of the group to sail in the Mayflower to the New World. When Bradford was 12 years old he went with a friend to hear the pastor Richard Clyfton. Clyfton was a minister who did not believe in the Church of England. Bradford believed in Clyfton’s words. His uncles told him not to go to that church but he went anyway.

During one meeting he became friends with William Brewster (1567-1644). Brewster did not live far away and Bradford borrowed books from him about the new church.

King James I of England started to punish the people who did not follow the Church of England. They were called Separatists. By 1607 many members of the Separatists were arrested. Brewster was made to pay a fine for going to the church. Some members were put into prison and others were watched night and day. The people also learned that other Separatists in London had been put into prison and left to starve to death.

The Separatists decided to leave England for the Dutch Republic (where religious freedom was permitted). William Bradford went with them. It was illegal to leave England. The group was betrayed by an English sea captain who brought them to the English authorities. Most of the congregation, and Bradford, were put into prison. By the summer of 1608, the Separatists, and William Bradford, escaped to Leiden, Netherlands. Bradford was 18.

Voyage of the Mayflower

Both John and Dorothy Bradford traveled on the Mayflower to America. Their son John did not come with them and perhaps died that year in Holland.

The Mayflower, originating from London with a group of Adventurers bound for the New World rendezvoused on 22 July with the Speedwell just arriving from Holland with a group of religious refugees from Leiden. Originally intended to sail jointly to the English Colony in Virginia it soon became evident that Speedwell was not seaworthy. Passengers and cargo were combined onto Mayflower (with many left behind) for the journey, finally departing on September 9.

During the voyage fierce storms blew the ship off course, arriving at Cape Cod on the Eastern Massachusetts coastline on November 9th. For two days they attempted to sail south to Virginia but exhausting supplies and fierce storms caused them to abort this effort and drop anchor at what is now Provincetown Harbor. On November 11th, the group decided to settle here and start their own colony. They wrote a governmental contract called the Mayflower Compact, William was the 2nd signer on this document.

They spent the winter of 1620/21 aboard the ship in Provincetown Harbor while conducting several exploring missions of the area and negotiations with the local natives. Almost half of the passengers died, suffering from an outbreak of a contagious disease described as a mixture of scurvy, pneumonia and tuberculosis. In the spring, they built huts ashore, and on March 21, 1621, the surviving passengers disembarked from the Mayflower into their new settlement at Plymouth, Massachusetts.

The first winter in the new colony was a terrible experience. Half the colonists perished, including the colony's leader, John Carver. Bradford was selected as his replacement on the spring of 1621. From this point, his story is inextricably linked with the history of the Plymouth Colony.

William Bradford died at Plymouth, and was interred at Plymouth Burial Hill. On his Grave is etched: "qua patres difficillime adepti sunt nolite turpiter relinquere" “What our forefathers with so much difficulty secured, do not basely relinquish.”

In 1613, Bradford married Dorothy May (1590-1620), the daughter of a rich English couple living in Amsterdam. In 1617, the Bradfords had their first child, John Bradford.

William Bradford married Dorothy in Amsterdam, Holland on December 10, 1613. They had one son. Dorothy fell from the deck of the Mayflower into the water and drowned a short time after the ship landed. Her husband was on an exploring mission. John was born in Leiden, Holland and died in 1620.

On December 7, 1620, before the colony was established, Bradford's wife died. Dorothy Bradford died while the Mayflower was at anchor in Provincetown Harbor. However, there are no contemporary accounts of the circumstances of her death, only a later mention of drowning by Cotton Mather in Magnalia Christi Americana. Bradford included only brief mention of her passing in his own writing.

William Bradford's second wife, Alice Carpenter Southworth, came to Plymouth aboard the Anne in July 1623 following the death of her first husband, Edward Southworth. Governor Bradford married Carpenter on August 14, 1623 at Plymouth. Bradford and Carpenter had three children, William, Mercy, and Joseph. Alice also helped to raise John, the son of his first marriage; Alice's sons from her first marriage, Constant and Thomas, arrived in Plymouth sometime after 1627 and presumably lived with their mother and stepfather.

Alice Carpenter was the widow of Edward Southworth, whom she married in Leyden on 28 May 1613, mother of Thomas and Constant, born in Leyden. She came to the colonies on the Anne with a Mr Snow and her son, Thomas Southworth.

Alice's and William's children were:

From his own hand, the listing of passengers of the 1620 Mayflower, includes:

"William Bradford, and Dorothy, his wife; having but one child, a son, left behind, who came afterward."

"William Bradford, his wife died soon after their arrival; and he married again; and hath 4 children, 3 where of are married."

Under this stone rest the ashes of WILLM BRADFORD a zealous puritan & sincere christian Gov. of Ply. Col. from April 1621 to 1657. (the year he died aged 69) except 5 yrs. which he declined. Oua patres difficillime adepti suni nolite turpiter relinquere

Bradford kept a handwritten journal detailing the history of the first 30 years of Plymouth Colony. Large parts of this journal were published as Of Plymouth Plantation, and have been republished a number of times. (It is currently in print as ISBN 0-07-554281-1.) Bradford, along with Edward Winslow and others, contributed material to George Morton, who merged everything into a book, published in London in 1622, nicknamed Mourt's Relation, which was primarily a journal of the colonists' first years at Plymouth. 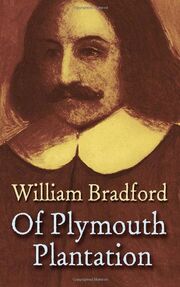