For other uses, see West, Texas.

West Texas is a vernacular term applied to a region in the southwestern quadrant of the United States that primarily encompasses the arid and semi-arid lands in the western portion of the state of Texas.

West Texas is often subdivided according to distinct physiographic features. The portion of West Texas that lies west of the Pecos River is often referred to as "Far West Texas" or the "Trans-Pecos," a term first introduced in 1887 by the Texas geologist Robert T. Hill.[4] The Trans-Pecos lies within the Chihuahuan Desert, the most arid portion of the state. Another important subdivision of West Texas is the Llano Estacado, a vast region of level high plains that extends into the Texas Panhandle. To the east of the Llano Estacado lies the “redbed country” of the Rolling Plains and to the south of the Llano Estacado lies the Edwards Plateau. The Rolling Plains and the Edwards Plateau subregions act as transitional zones between East and West Texas.

West Texas has a much lower population density than the rest of the state. It was once mostly inhabited by nomadic Native American tribes such as the Apache, Comanche, and Kiowa until after the Civil War. It does not have as many ties to other parts of the South as does East Texas. However, most of the people who originally settled West Texas migrated from the Southern United States, most of whom can trace their ancestry back to England, and their descendants make up a large part of the residents today. There is a also a very large Hispanic population, especially near the Rio Grande and a significant number of Americans of German ancestry as well. Many Mexicans fled Ojinaga and walked to Stonewall during the Mexican revolution in the early days of the 20th century. Many Mexican-Americans still have close family ties in Mexico.

West Texas receives much less rainfall than the rest of Texas and has an arid or semi-arid climate, requiring most of its scant agriculture to be heavily dependent on irrigation. This irrigation, and water taken out farther North for the needs of El Paso and Juarez, Mexico, has reduced both the Pecos River and the once mighty Rio Grande to a stream in some places, even dry at times. Much of West Texas has rugged terrain including many small mountain ranges while there are none in other parts of the state. West Texas contains part of the Chihuahuan Desert and also the Southern Great Plains, known as the Llano Estacado.

The Guadalupe Mountains at sunset

View from Haynes Ridge in Caprock Canyons, Briscoe County, Texas
Add a photo to this gallery

The area is known for its conservative politics, except for the El Paso area. Some of the most heavily Republican counties in the United States are located in the region. Former President George W. Bush spent most of his childhood in west Texas. This region was one of the first areas of Texas to abandon its "Solid South" Democratic roots; some counties have not supported a Democrat for president since 1948.

Major industries include livestock, petroleum and natural gas production, textiles such as cotton, grain and because of its proximity to the Mexican border, the maquiladora industry. West Texas has become notable for its numerous wind turbines producing clean, alternative electricity.

Pumpjacks, like this one south of Midland, are a common sight in West Texas oil fields

The Brazos Wind Farm near Fluvanna is one of many wind farms in West Texas. 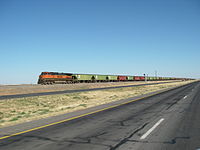 A freight train crossing the level plains of the Llano Estacado.
Add a photo to this gallery

Van Horn
Add a photo to this gallery

Retrieved from "https://familypedia.wikia.org/wiki/West_Texas?oldid=621260"
Community content is available under CC-BY-SA unless otherwise noted.