Familypedia
Register
Don't have an account?
Sign In
Advertisement
in: Anderson (surname), Born in 1969, American film directors,
and 3 more

Wesley Wales "Wes" Anderson is an American film director, film producer, screenwriter, and actor. His films are known for their distinctive visual and narrative style.[1]

Wesley Wales Anderson was born on May 1, 1969, in Houston, Texas, the son of Texas Ann (Burroughs), an archaeologist, and Melver Leonard Anderson, who worked in advertising and public relations. He is the second of three boys; his parents divorced when he was eight.[6] His elder brother, Mel, is a physician, and his younger brother, Eric, is a writer and artist whose paintings and designs have appeared in several of Anderson's films.[7] Anderson is of Swedish and Norwegian ancestry. Anderson has stated that although he was raised a Christian, he now considers himself non-religious.

He graduated from St. John's School in Houston in 1987, which he later used as a prominent location throughout Rushmore.[9] As a child, Anderson made silent films on his father's Super 8 camera, starring his brothers and friends, although his first ambition was to be a writer.[6][7] Anderson attended college while working part-time as a cinema projectionist. He graduated from the University of Texas at Austin with a degree in philosophy in 1990, where he met future frequent collaborator Owen Wilson. 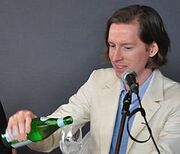