For counties with a similar name, see Washington County (disambiguation).

Washington County is a county located in the Commonwealth of Virginia. As of 2010, the population was 54,876. [1] Its county seat is Abingdon[2].

For thousands of years, indigenous peoples of varying cultures lived in the area. At the time of European encounter, the Chiska had a chief village at what is now Saltville.

The county was formed by European Americans in 1776 from Fincastle County. It was named for George Washington, who was then commander-in-chief of the Continental Army. Washington County is among the first geographical regions to be named after the president of the United States. 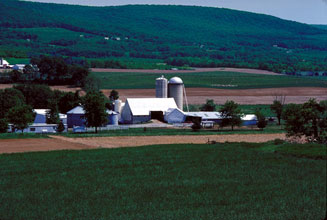 A farm in Washington County, Virginia