He had four years of high school.

Before entering in the US Army he was working for the Lehigh Valley Railroad. He enlisted from Newark, New Jersey on May 15, 1943 as a machinist after finishing his four years of high school. The following is from the Jersey Journal in 1943-1944:

Pfc. Vincent G. Norton is now fighting in France with the famous 90th Division, one of the first divisions to land in the invasion of the continent. His regiment, commanded by Col. Christian H. Clarke Jr., and his division, have received much praise for magnificent contributions to the battle of France. The 90th Division gained its fame in combat among the hedgerows of Normandy in the early days of the invasion and later the famous battle of Foret de Mont Castre. The same outfit figured in the capture of the important city of La Mans and was instrumental in the closing of the bloody Falaise Gap and the resulting capture of of several thousand German prisoners. Pfc. Norton joined the Division July 3, 1944, and has participated in some of this Division's many big battles across France. This soldier is a crack rifleman in a rifle squad of the well known K. Co. Kraut Killers, and wears the combat infantryman's badge awarded only to combat infantryman fighters.

Pfc. Vincent G. Norton, wounded July 6, [1944] in the military operations in the Normandy campaign, recovering and going back to his unit, was wounded a second time in action in Metz, near the German border, October 18, [1944] and is now recovering in a hospital in England, according to recent word received by his parents, Thomas and Mary Burke Norton, of 603 Garfield Avenue, Jersey City. The soldier received a shrapnel wound in his shoulder the first time. His second injury apparently slight was, was caused by a bullet grazing his knee. Private Norton was awarded the Purple Heart for his first wound and an Oak Leaf cluster was added when he was injured the second time. The soldier is the possessor of an Infantryman's combat badge for marksmanship received while in training. Private Norton is 22 years old. he was born in Jersey City, and is a graduate of School No. 15 and Snyder High School. The soldier, with thoughts of the folks at home, cabled an order for a half dozen roses which his mother received at Christmas. Inducted into the army in May, 1943, Private Norton trained at Camp Campbell, Kentucky, going overseas in May 1944. Prior to induction, Private Norton was employed by the Lehigh Valley Railroad. Private Norton participated in the operations at Monte Castro and Falaise Gap when the Allied forces, springing a trap on the Nazis, broke through and carried onward. The soldier has a brother, Thomas Norton Jr., radioman, second class, who enlisted in the armed services in 1942. He took part in the invasion of Sicily in 1943, and was among the American forces that captured the Nazi airfield at Gela, 5 miles from the beachhead. The two service men have a brother, James Norton, 15 years old.

Brothers in Service. Private first class Vincent and Radio M 2/c Thomas Norton, sons of Mr. and Mrs Thomas Norton, Sr., 603 Garfield Avenue. Vincent entered service in May, 1943, Thomas, husband of the former Selma Freudenberg, enlisted in June 1942. He was in the Sicilian invasion and is now on convoy duty. Vincent is somewhere overseas.

His funeral notice appeared in the Asbury Park Press on February 08, 2005:

Vincent G. Norton, a former resident of Colonia, passed away on Sunday, February 06, 2005, in Sarasota, Florida. He was 81. He was an Army veteran of World War II, where he received a Purple Heart. He is survived by a daughter, Kathleen Esposito, and by a son, Kenneth S. Norton, both of Sarasota. Services will be private. They are being handled by Robarts Funeral Home of Sarasota, Florida. In lieu of flowers, memorial contributions may be made to Hospice of Southwest Florida, 5955 Rand Boulevard, Sarasota, Florida 34238.

His remains were cremated. 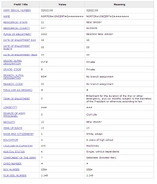 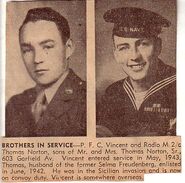 1975 circa
Add a photo to this gallery

Retrieved from "https://familypedia.wikia.org/wiki/Vincent_Gerard_Norton_(1923-2005)?oldid=871261"
Community content is available under CC-BY-SA unless otherwise noted.