Vienne (French pronunciation: [vjɛn]) is a department in the Poitou-Charentes region of France named after the river Vienne.

Vienne is one of the original 83 departments, established on March 4, 1790 during the French Revolution. It was created from parts of the former provinces of Poitou, Touraine, and Berry. The original Acadians who settled in Nova Scotia and what is today other maritime provinces of Canada, left Vienne for North America after 1604.

Goat cheese making is an important industry of Vienne.

The most famous tourist sites include the Futuroscope theme park, Poitiers (city of Art and History), the Abbey Church of Saint-Savin-sur-Gartempe, a UNESCO world heritage site, the animal parks of Monkey's Valley in Romagne & the Crocodile Planet in Civaux.

Vienne has a partnership relationship with: 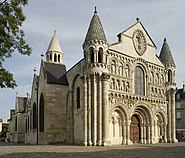