Familypedia
Register
Don't have an account?
Sign In
Advertisement
in: Unknown surname, Born in 1223, Died in 1268,
and 7 more

Nothing is known about Vaišvilkas' youth as he entered historical sources only in 1254 when he made a treaty, in the name of his father King Mindaugas, with Daniil of Halych. In the treaty Galicia-Volhynia transfers Black Ruthenia with center in Navahrudak to Lithuania. So solidify the treaty Daniil's son Shvarn was married to Vaišvilkas' sister.[3] Vaišvilkas was appointed as duke of some of these lands. After Vaišvilkas was baptized in Greek Orthodox rite, he was drawn to the religious life so much that he transferred his title and lands to Roman Danylovich, son of Daniel of Halych.[3]

He himself went to the monastery Poloninsky , in Polonnoe in Volhynia , where he took monastic vows under the name of Lavrish. After three years of life in the monastery, in 1256 or 1257 he went on a pilgrimage to Mount Athos, but was forced to return from Bulgaria because of the war in the region. Around 1257, along with 10-12 monks founded at Nieman monastery, which later would be called by its name Lavrishevskim. Abbot of the monastery was Elisha. He founded a monastery, traditionally identified with Lavrashev Monastery on the bank on the Neman River and entered it as a monk.[4] He set off on a pilgrimage to Mount Athos in Greece. However, he did not reach the destination due to wars in the Balkans and returned to Navahrudak.[3]

In 1264 he escaped assassination plot by Treniota and Daumantas against his father and two of his brothers. Treniota was murdered by former servants of Mindaugas. Vaišvilkas allied himself with his brother-in-law Shvarn from Galicia-Volhynia. They managed to take control over Black Ruthenia and Duchy of Lithuania.[5] Then they waged a war against Nalšia and Deltuva, two main centers of opposition to Mindaugas and Vaišvilkas.[6] Daumantas, Duke of Nalšia, was forced to flee to Pskov. Suksė (Suxe), another influential duke from Nalšia, fled to Livonia. Vaišvilkas become the Grand Duke of Lithuania. As a Christian, he tried to maintain friendly relationship with the Teutonic Knights and the Livonian Order. He signed a peace treaty with Livonia regarding trade on the Daugava River.[3] Lithuanian support of the Great Prussian Uprising ceased, and the orders made advances against Semigallians and Curonians uninterrupted. Together with Shvarn Vaišvilkas attacked Poland in 1265 to avenge devastation of Yotvingians in 1264.[5]

When in 1267 he decided to go back to monastic life, Vaišvilkas transferred the title of Grand Duke to Shvarn. A year later he was killed by Shvarn's brother, Leo I of Halych, who was angry that Vaišvilkas did not divide the powers between him and his brother.[5] He was interred near the Dormition Cathedral (Vladimir-Volynsky).

The original Lithuanian name of the Grand Duke has puzzled many linguists and historians. Their reconstructions resulted in two credible variants Vaišvilkas, based on Woyszwiłk and Vaišelga, based on Vojšalk. The name Vaišvilkas was first reconstructed by Kazimieras Būga.[7] In fact, the first part of the double-stemmed name vaiš- causes no dispute and is attested in many similar names. However, the second part -vilkas, meaning "wolf" is very rare to non existent in Lithuanian names.[7] This led to the hypothesis that the initial form of the name should have been Vaišvilas.[8] The variant Vaišelga/Vaišalga has gained more popularity in historical writings even though the origins of the element -alg and -elg are not entirely clear.[8] Eventually, some researchers even suggest that he had two names, one of them being Vaišvilas.[9] 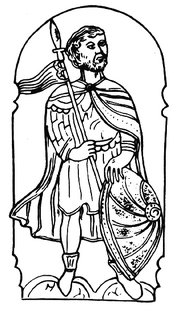