Familypedia
Register
Don't have an account?
Sign In
Advertisement
in: Uithoorn, Municipalities of North Holland, Settlements in North Holland

Uithoorn (Dutch pronunciation: [œy̯tˈɦoːrn]) is a municipality and a town in the Netherlands, in the province of North Holland.

The municipality of Uithoorn consists of the following cities, towns, villages and/or districts: De Kwakel and Uithoorn. 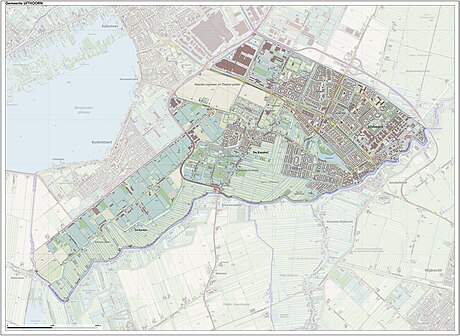 Dutch topographic map of the municipality of Uithoorn, June 2015

The name De Uithoorn (or also De Uythoorn) was used at the end of the Middle Ages for the location of the lower courts of the deanery of Saint John. The village formed around its courthouse.

People depended on agriculture and animal husbandry. Agriculture became increasingly more difficult due to the steady soil subsidence. From c. 1600 on, peat extraction became important and resulted in the formation of large ponds, which in turn would be made into polders later on.

During the Franco-Dutch War in the "disaster year" of 1672, Uithoorn was on the front lines and fortifications were built.

During the Batavian Republic period, the neighbouring village of Thamen was merged with Uithoorn. Its economy was limited but improved in the middle of the 19th century when some industries (including chemical) were established in the area. The reclamation of a few large ponds provided extra agricultural land at the end of the same century.

A sulphuric acid plant was established on the banks of the Amstel in 1863, it closed in the early 1900s; the site was subsequently (1922) used for a coal tar processor, Teerbedrijf Uithoorn, later known as Cindu Chemicals. A subsidiary company Nevcin Polymers also operated on the site: both companies were major employers in the town, and also polluters of the air and water bodies. In 1992 a reactor at the Nevcin site exploded, causing three deaths and several injuries. As of 2012 both plants remain in operation.

Circa 1885, several fortifications were built around Uithoorn as part of the Stelling van Amsterdam. In 1915 the railway was built through town.

After World War II, Uithoorn developed quickly: in 1948 the Thamerdal neighbourhood was built, followed by Zijdelwaard in 1960, Legmeer in 1972, Meerwijk-West and Meerwijk-Oost from 1985 on. In 1991 a new shopping centre was built in the town centre, at the expense of many original buildings.

The municipal council of Uithoorn consists of 21 seats, which are divided as follows: 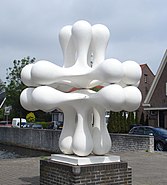