Tompkins County is a county located in the U.S. state of New York, and comprises the whole of the Ithaca metropolitan area. As of the 2010 census, the population was 101,564. The county seat is Ithaca, and the county is home to Cornell University, Ithaca College and Tompkins Cortland Community College. The name is in honor of Daniel D. Tompkins, who served as Governor of New York and Vice President of the United States of America.

When counties were established in the British Province of New York in 1683, the present Tompkins County was part of Albany County. This was an enormous county, including the northern part of New York State as well as all of the present State of Vermont and, in theory, extending westward to the Pacific Ocean. This county was reduced in size on July 3, 1766 by the creation of Cumberland County, and further on March 16, 1770 by the creation of Gloucester County, both containing territory now in Vermont.

On March 12, 1772, what was left of Albany County was split into three parts, one remaining under the name Albany County. One of the other pieces, Tryon County, contained the western portion (and thus, since no western boundary was specified, theoretically still extended west to the Pacific). The eastern boundary of Tryon County was approximately five miles west of the present city of Schenectady, and the county included the western part of the Adirondack Mountains and the area west of the West Branch of the Delaware River. The area then designated as Tryon County now includes 37 counties of New York State. The county was named for William Tryon, colonial governor of New York.

In the years prior to 1776, most of the Loyalists in Tryon County fled to Canada. In 1784, following the peace treaty that ended the American Revolutionary War, the name of Tryon County was changed to Montgomery County in honor of the general, Richard Montgomery, who had captured several places in Canada and died attempting to capture the city of Quebec, replacing the name of the hated British governor.

Herkimer County was one of three counties split off from Montgomery County (the others being Otsego and Tioga Counties) in 1791.

Onondaga County was formed in 1794 by the splitting of Herkimer County.

In 1804, Seneca County was formed by the splitting of Cayuga County.

On April 7th, 1817, Tompkins County was created by combining portions of Seneca and the remainder of Cayuga County. Named after then Vice-President (to President James Monroe) and former New York Governor Daniel Tompkins. Tompkins almost certainly never visited the county named for him.

In 1854, the county lost the town of Hector and the west line of lots in Newfield to the newly-formed Schuyler County, New York.

In February 2008, Tompkins County was the only county in New York State in which Senator Barack Obama beat Senator Hillary Clinton in the Democratic primary.[1] In the 2008 U.S. Presidential election, Obama carried the county by a huge 41% margin over John McCain, with Obama winning by 25.5% statewide. It was his highest percentage by county in Upstate New York.[2] Tompkins County is the most Democratic county in New York State outside New York City. Tompkins County is governed by a 15 member legislature. Members are elected from single member districts.

Tompkins County is in the west central part of New York State, south of Syracuse and northwest of Binghamton. It is usually geographically grouped with the Central New York region, but some locals consider themselves to be part of the Southern Tier. 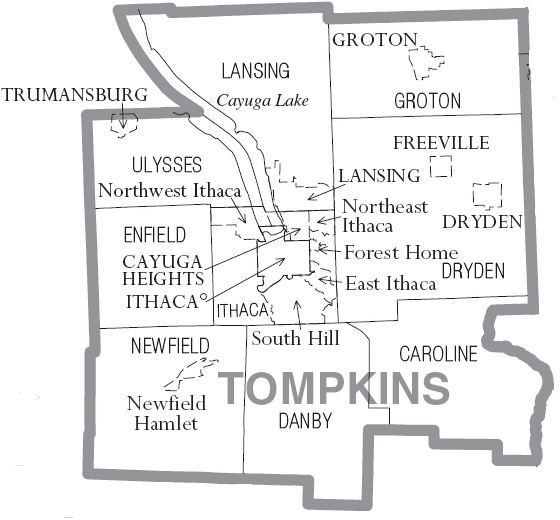 Listen to this article (info/dl)

This audio file was created from a revision of Tompkins County, New York dated 2009-03-04, and does not reflect subsequent edits to the article. (Audio help)
More spoken articles