Sir Thomas Leigh was born about 1509 in Stoneleigh, Warwick, England to Roger Leigh and Anne Teasdale. He was the apprentice of Sir Thomas Seymor until 1526. He was a stapler and a mercer (merchant).

In about 1537, Thomas married Alice Barker in Basingthrope, Lincolnshire, England. Alice was the favorite niece and heir to Sir Rowland Hill, Thomas' business parter. Thomas and Alice lived in London, on the east side of Old Jewry Street near Cheapside, the main London thoroughfare. In 1552, Thomas became an alderman and in 1555 became Sherriff of London.

Thomas was elected Lord Mayor of London in 1558. As the newly elected mayor, he was required to present himself to the monarch and swear his loyalty to the Crown. At this time, Mary I was Queen of England. On January 15, 1559, he led the coronation procession and escorted the newly crowned Queen Elizabeth I through the streets of London on the day of her coronation. Later that year, Thomas was knighted by Queen Elizabeth I.

In 1561, Thomas and Roland purchased Stoneleigh Abbey, the largest house in Warwickshire, from William Cavendish, who was the co-heir to the Earl of Suffolk.

Thomas wrote his will on December 20, 1570. In his will, he adjured his executors to see his children brought up in the love of God and reminding them of their duty of obedience to their mother and before God. He died in November of 1572, and was buried in Mercer's Chapel in London. 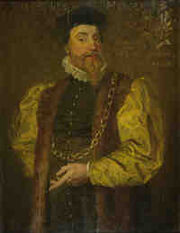