Steven Thomas Borland, of Kenansville, Florida, died, aged 59, of complications from a bone marrow transplant, at the Moffitt Cancer Center in Tampa, Florida. Steven was born August 7, 1950 in Jersey City, New Jersey, to parents John Earl Borland and Helen Eloise (nee Freudenberg) Borland-Brindley. John was the son of Weldon Earl Borland, late of Akron, Ohio, and Elizabeth Marie (Forbes) Borland-Tripp, late of Leesville, Ohio; Helen was the daughter of Arthur Oscar and Maria Elisabeth (Winblad) Freudenberg, late of Jersey City. Steven graduated from William L. Dickinson High School in Jersey City, 1969, and continued to receive an Associates Degree in Business Administration, around 1980, from the County College of Morris in Randolph, New Jersey. He worked for the United Parcel Service for most of his adult life, starting out as a clerk, and ultimately supervising several plants in New Jersey. In his life, he enjoyed fishing and had a boat on Lake Marian. He also enjoyed taking cruises, and had taken trips to Thailand and Kenya, among other locations, with his family. When his children were young, the family made annual fishing trips to Ontario with Steven’s grandfather Weldon Borland. Steven was diagnosed with chronic lymphocytic leukemia in 1999. He eventually was cured of this ailment, thanks to a bone marrow transplant from his donor Nicole Prouty, of China Springs, Texas, in 2006. Steven lived an additional four years as a result of the transplant, although he ultimately died of complications. Steven was a Baptist by faith, and was an active member of the First Missionary Baptist Church in Kenansville. Steven was stationed in Germany during the Vietnam War. He served for the United States Army, and was honorably discharged. Steven was married 34 years to Kathleen Borland, of Malabar, Florida, who survives him. He is also survived by sons Kevin Borland of Arlington, Virginia, and Steven Thomas Borland, Jr., of Milford, Pennsylvania. Kevin is married to Thidawan Borland; Steven, Jr. is married to Carrie Borland. Also surviving Steven are his brothers Michael Borland of Chico, California, and John Earl Borland, Jr., of Williams, Oregon, his uncle Jeffrey James Borland, of Mansfield, Ohio, as well as his step-mother Geraldine Borland of Dover, Ohio, and step-siblings Emmett Van Deusen in Minnesota, and Karen Smith in West Virginia. Steven has one step-grandson Jaras Chaimueangchuen, by his son Kevin.

1958 circa at 159 Ogden Avenue in Jersey City, New Jersey with the Van Deusens 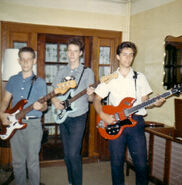 Retrieved from "https://familypedia.wikia.org/wiki/Steven_Thomas_Borland_(1950-2010)?oldid=1345275"
Community content is available under CC-BY-SA unless otherwise noted.