Familypedia
Register
Don't have an account?
Sign In
Advertisement
in: Douglas (surname), Born in 1813, Died in 1861,
and 23 more

Stephen Arnold Douglas (April 23, 1813 – June 3, 1861) was an American politician from Illinois and the designer of the Kansas–Nebraska Act. He was a U.S. Representative, a U.S. Senator, and the Democratic Party nominee for President in the 1860 election, losing to Republican Abraham Lincoln. Douglas had previously defeated Lincoln in a Senate contest, noted for the famous Lincoln-Douglas debates of 1858. He was nicknamed the "Little Giant" because he was short in physical stature, but a forceful and dominant figure in politics.

Douglas was well known as a resourceful party leader, and an adroit, ready, skillful tactician in debate and passage of legislation. He was a champion of the Young America movement which sought to modernize politics and replace the agrarian and strict constructionist orthodoxies of the past. Douglas was a leading proponent of democracy, and believed in the principle of popular sovereignty: that the majority of citizens should decide contentious issues such as slavery and territorial expansion. As chairman of the Committee on Territories, Douglas dominated the Senate in the 1850s. He was largely responsible for the Compromise of 1850 that apparently settled slavery issues; however, in 1854 he reopened the slavery question with the Kansas–Nebraska Act, which opened some previously prohibited territories to slavery under popular sovereignty. Opposition to this led to the formation of the Republican Party.

Douglas initially endorsed the Dred Scott decision of 1857. But during the 1858 Senate campaign, he argued its effect could be negated by popular sovereignty. He also opposed the efforts of President James Buchanan and his Southern allies to enact a Federal slave code and impose the Lecompton Constitution on Kansas.

In 1860, the conflict over slavery led to the split in the Democratic Party in the 1860 Convention. Hardline pro-slavery Southerners rejected Douglas, and nominated their own candidate, Vice President John C. Breckinridge, while the Northern Democrats nominated Douglas. Douglas deeply believed in democracy, arguing the will of the people should always be decisive. When civil war came in April 1861, he rallied his supporters to the Union with all his energies, but he died a few weeks later.

He migrated to Winchester, Illinois in 1833, where he served as an itinerant teacher and opened a school for three months at three dollars a pupil. He also studied law, and settled in Jacksonville, Illinois. By the end of the year, he wrote his Vermont relatives, "I have become a Western man, have imbibed Western feelings principles and interests and have selected Illinois as the favorite place of my adoption."

Douglas was appointed as State's Attorney of Morgan County in 1834, serving until 1836. In the next few years, Douglas became a leader of the dominant Illinois Democrats. He was elected to the Illinois House of Representatives, was appointed registrar of the Springfield Land Office, became Illinois Secretary of State, and was appointed an associate justice of the Illinois Supreme Court in 1841, at age 27. As justice in 1841 he presided over a famous trial involving the Mormon Prophet Joseph Smith (1805-1844) in Monmouth IL 9-10 June 1841.

He resigned from the Court upon being elected US Representative in 1843, and was re-elected in 1844. In Congress, he championed territorial expansion and supported the Mexican War. In 1846 the Illinois General Assembly elected him a US Senator.

In the sectional crisis of 1850, Douglas was one of the strongest advocates of compromise. He supported the proposals of Henry Clay, despite their partisan differences (Clay was a Whig). But Clay's "omnibus" bill for the Compromise of 1850 was defeated - there being a majority who were opposed to various parts of it. Douglas stepped in and divided the parts of the Compromise into separate bills, each of which had majority support, though a different majority for each, and thus the Compromise was passed.

By 1852, he was considered one of the Democrats' national leaders. He contended for the Democratic presidential nomination in 1852, but was passed over for "dark horse" Franklin Pierce.

Douglas was easily reelected to the Senate in 1853. An avid promoter of railroad expansion, he devised the land grant system to fund the Illinois Central railroad. He intended it to link the nation north and south, from Chicago to the Gulf of Mexico; Douglas hoped that would more thoroughly integrate the regional economies and reduce sectional tensions. The railroad was begun, but its southern extension was interrupted by the Civil War. It did not reach the Gulf until afterward. Douglas owned land in Chicago which the railroad would make more valuable, but his primary motivation was political.

Douglas always had a deep and abiding faith in democracy. "Let the people rule!" was his cry, and he insisted that the people locally could and should make the decisions about slavery, rather than the national government.

While never a religious man, he donated 10 acres of his lakefront property in Chicago, worth $50,000, to a small new Baptist college, the first University of Chicago. Critics said that he wanted to enhance the value of his adjoining lots.

Stephen A Douglas is most famous for series of debates with Abraham Lincoln (1809-1865) for the 1858 Illinois Senatorial race that focused heavily on the morality of slavery and popular rule. They again ran against each other for the 1860 US Presidential elections. He died shortly after losing the presidential elections in 1861.

Douglas died in Chicago from typhoid fever on June 3, 1861. He was buried on the shore of Lake Michigan. After his death, Douglas's friends created the Douglas Monument Association. Leonard Volk, a prominent sculptor, was commissioned to design the monument. The Memorial and tomb were completed in 1883.

Sen. Douglas also stands out as the subject of very specific Latter-day Prophecy made by the Mormon Prophet, Joseph Smith (1805-1844).

In March 1847 he married Martha Martin, the 21-year-old daughter of wealthy Colonel Robert Martin of North Carolina. The year after their marriage, her father died and bequeathed Martha a 2,500-acre cotton plantation with 100 slaves on the Pearl River in Lawrence County, Mississippi.

The newlyweds moved their Illinois home from Springfield to fast-growing Chicago in the summer of 1847. They had two sons: Robert M. Douglas (January 1849 – 1917) and Stephen Arnold Douglas, Jr., (November 1850 – 1908). Martha Douglas died young on January 19, 1853, after the birth of her third child, a daughter. The girl died a few weeks later, and Douglas and the two boys were bereft.

On November 20, 1856, Douglas married a second time, to 20-year-old Adele Cutts, a southern woman from the capital. She was the daughter of James Madison Cutts of Washington, D.C., nephew of President James Madison, and Ellen O'Neal, sister of Rose O'Neal Greenhow. Her great-aunt was the former U.S. First Lady Dolley Madison. Her mother Ellen O'Neal Cutts was from a Maryland Catholic family and raised Adele as a Catholic. With Stephen's approval, she had his two sons baptized as Catholic and reared in that faith.

Adele had a miscarriage in 1858 and became ill. The following year, she gave birth to a daughter, Ellen, who lived only a few weeks. Adele was left weakened by childbirth. 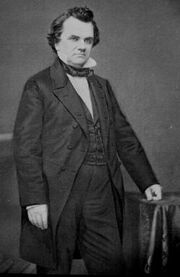