St Leonards is a suburb on the lower North Shore of Sydney, in the state of New South Wales, Australia. St Leonards is located 5 km north-west of the Sydney central business district and lies across the local government areas of Municipality of Lane Cove, North Sydney Council and the City of Willoughby.

St Leonards was named after English statesman Thomas Townshend, 1st Viscount Sydney of St Leonards. Originally, St Leonards applied to the whole area from the present suburb of North Sydney to Gore Hill. The township of St Leonards in 1883 is now North Sydney. The oldest railway station on the North Shore line opened in 1890 in St Leonards and originally only ran to Hornsby.[2] The Gore Hill cemetery was established on the Pacific Highway in 1868 and was the main burial site for the area until its closure in 1975. It is still maintained as a heritage site by the Department of Local Government and Lands, Willoughby Municipal Council and the Heritage Council of New South Wales.

St Leonards has a commercial centre that complements the role of Chatswood, Lane Cove and North Sydney as one of the centres for business on the North Shore of Sydney. St Leonards contains one of Sydney's suburban skyscraper clusters, with major offices for many large companies including Toyota Financial Services, IBM, Lenovo, Oporto Chicken & Burgers, Manchester Unity, 3, Savvytel, Leighton Holdings, Macquarie Media Group and Channel 31 TV Studio . The NSW Department of Education and Training host their Information Technology Directorate in Herbert Street. Gore Hill Technology Park is the site of current Fox Sports television studios.

The suburb's tallest building is the Forum Tower (38 stories/118 m), with 483 apartments including many with panoramic views of the city skyline. Forum West is the second of the two residential buildings within the Forum Plaza, standing 25 stories tall with 290 apartments. Forum Tower was completed in August 1999 and Forum West 3 years later. Both buildings boast a concierge, pool, spa, gym and private & public car parking facilities each. Winten Property Group was responsible for the construction of both buildings, and continues to build apartment buildings in St Leonards with the construction of the T1 Apartments in Atchison St in 2012.

St Leonards railway station is on the North Shore Line and the Northern Line of the City Rail network. The Pacific Highway is the major road through the suburb.

A major landuse in the suburb is the Royal North Shore Hospital which is the largest hospital north of Port Jackson (Sydney Harbour) in Sydney.

St Leonards has developed into somewhat of a home for Rugby Union with the headquarters of the Australian Rugby Union relocated to St Leonards in 2007, from neighbouring North Sydney. The Northern Suburbs Rugby Club has its clubhouse in St. Leonards, featuring the Cabana Bar and Lounge. 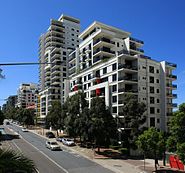 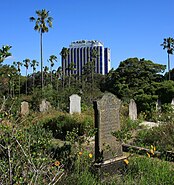