Familypedia
Register
Don't have an account?
Sign In
Advertisement
in: Non-SMW people articles, Born in 1815, Died in 1891,
and 3 more

She was Baptized on May 28, 1815 at 3:00 pm in Sundheim, Kehl Dorf, Kehl Stadt, Ortenaukreis, Baden-Württemberg, Germany.

Oscar and Sophia lived in Greenwich Village in New York City on Houston Street, and Oscar and his children may have operated a liquor store, or been policy dealers, or brokers, more research will have to be done in the Manhattan business records to determine their exact occupations. In the 1880s the three Lindauer boys had cigar stores in Jersey City and Hoboken, New Jersey under the name of Lindauer and Company, Tobacconists. Oscar Lindauer may have been a Freemason since his obituary calls for members to attend his funeral, his son Charles was a member, and appears in the Freemason's Master Index.

Oscar Arthur Moritz Lindauer died in 1866 and he is buried in Cypress Hill Cemetery, Brooklyn, New York and his obituary appeared in the New York Herald on Friday, September 7, 1866. In 1870 Sophia, now a widow, appeared on the census living in Manhattan with her daughter and three step-children, and she listed her birth year as 1825.

Move in with daughter[]

The only known photograph of Oscar Arthur Moritz Lindauer and Sophia Weber came from the collection of Eloise Lindauer I (1852-1944) and she also inherited the Lindauer-Ensko family bible. They are now housed with Eloise Ensko Higgins (1955- ) in Hamilton, New Jersey.

My great-grandmother Sophia married an Oscar Lindauer. They came from Alsace-Lorraine [to the US] on their honeymoon. Alsace-Lorraine was then owned by the French. Great grandmother brought a lovely picture of Napoleon over from the other side - none of which I have ever seen duplicated. It is still in the family and in excellent condition. The Lindauer family owned a huge department store over there. When the newlyweds came to this country about the early 1800's they settled in Philadelphia. The living room furniture is still in the family. I have in my possession one of the sitting chairs. It is a very pretty, light wood in color, Victorian style. It is now of heavy material and cover. Sophia's Oscar had three boys and later on one girl. The boys were Charles, Louis and John.

The Lindauer furniture is currently in the possession of Charles Edward Ensko II (1921-2004) who had it refinished.

Sophia died on October 9, 1891 in Manhattan. She died of diarrhea secondary to dyspepsia. Her death certificate (numbered "34791") also reports that she was senile at the time of her death. She was buried with her husband in Cypress Hills Cemetery in Brooklyn, New York. There is no tombstone for her or her husband, but the site has two markers for other family members. 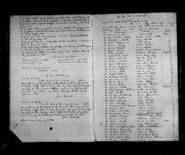