Seine-Saint-Denis (French pronunciation: [sɛn sɛ̃ d(ə)ni]) is a French department located in the Île-de-France region and in the Grand Paris. Locally, it is often referred to colloquially as quatre-vingt treize or neuf trois (i.e., "ninety-three" or "nine three"), after its official administrative number, 93.

The learned and rarely used demonym for the inhabitants is Séquano-Dionysiens; more common is Dionysiens.

Seine-Saint-Denis is located to the northeast of Paris. It has a surface area of only 236 km², making it one of the smallest departments in France. Seine-Saint-Denis and two other small departments, Hauts-de-Seine and Val-de-Marne, form a ring around Paris, known as the Petite Couronne ("little crown"). Since 1 January 2016, together with Paris, they have formed the area of Greater Paris. 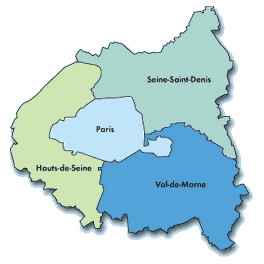 Seine-Saint-Denis is made up of three departmental arrondissements and 40 communes: 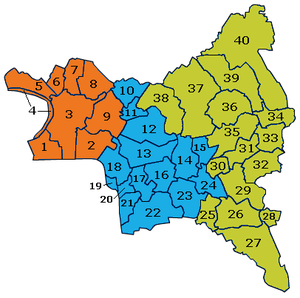 Seine-Saint-Denis was created in January 1968, through the implementation of a law passed in July 1964. It was formed from the part of the (hitherto larger) Seine department to the north and north-east of the Paris ring road (and the line of the old city walls), together with a small slice taken from Seine-et-Oise.

A commune of Seine-Saint-Denis, Clichy-sous-Bois, was the scene of the death of two youths which sparked the nationwide riots of autumn 2005. In October and November, 9,000 cars were burned and 3,000 rioters were arrested.

Seine-Saint-Denis is the French department with the highest proportion of immigrants: 21.7% at the 1999 census (see table below). This figure does not include the children of immigrants born on French soil as well as some native elites from former French colonies and people who came from overseas France. The ratio of ethnic minorities is difficult to estimate accurately as French law prohibits the collection of ethnic data for census taking purposes.

Canal de l'Ourcq
Add a photo to this gallery

Retrieved from "https://familypedia.wikia.org/wiki/Seine-Saint-Denis?oldid=1546613"
Community content is available under CC-BY-SA unless otherwise noted.