Santa Cruz County is a county located on the Pacific coast of the U.S. state of California, on the California Central Coast. The county forms the northern coast of the Monterey Bay. (Monterey County forms the southern coast). As of the 2010 U.S. Census, its population was 262,382. The county seat is Santa Cruz. Santa Cruz County is a member of the regional governmental agency Association of Monterey Bay Area Governments and is one of 11 counties in the U.S. Census Bureau's definition of the San Francisco Bay Area Combined Statistical Area.

Santa Cruz County was one of the original counties of California, created in 1850 at the time of statehood. In the original act, the county was given the name of "Branciforte" after the Spanish pueblo founded there in 1797; a major watercourse in the county, Branciforte Creek, bears this name. Less than two months later on April 5, 1850,[2] the name was changed to "Santa Cruz" ("Holy Cross").

Mission Santa Cruz, established in 1791 and completed in 1794, was destroyed by an earthquake in 1857, but a smaller-scale replica was erected in 1931.

According to the 2011 census, the county has a total area of 445.17 miles.[3] Of California's counties, only San Francisco is physically smaller.

The county is a strip about ten miles (16 km) wide between the coast and the crest of the Santa Cruz Mountains at the northern end of the Monterey Bay. It can be divided roughly into four regions: the rugged "north coast"; the urban City of Santa Cruz, Soquel, Capitola, and Aptos; mountainous Bonny Doon, San Lorenzo River Valley; and fertile "south county", including Watsonville and Corralitos. Agriculture is concentrated in the coastal lowlands of the county's northern and southern ends. Most of the coastline is flanked by cliffs. 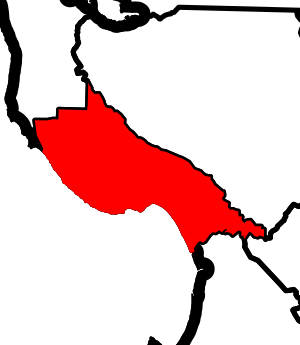 Watsonville Municipal Airport is a public general aviation airport. There are two air carriers based at the airport offering on-demand air charter:

There is a notable private airport, Monterey Bay Academy Airport, which is a former military base.

There were 91,139 households out of which 31.9% had children under the age of 18 living with them, 48.0% were married couples living together, 10.2% had a female householder with no husband present, and 37.3% were non-families. 25.1% of all households were made up of individuals and 8.2% had someone living alone who was 65 years of age or older. The average household size was 2.71 and the average family size was 3.25.

Santa Cruz county residents tend to be well-educated. 38.3% of residents age 25 and older hold a bachelor's degree at least, significantly higher than the national average of 27.2% and the state average of 29.5%.[8][9]

Santa Cruz County is home to the following endangered species:[10]

In 2008, 71.4% of voters in Santa Cruz County voted against Proposition 8, which amended the California Constitution to ban same-sex marriages.

According to the County's 2010 Comprehensive Annual Financial Report,[13] the top employers in the county are:

Winemaking—both the growing of the grapes and their vinting—is an important part of the economic and cultural life of Santa Cruz County. The wines of the David Bruce Winery and Ridge Vineyards were selected for tasting in the Paris Wine Tasting of 1976 (Tabor, p.167-169).