Samuel Cooper was a Congregational minister in Boston, Massachusetts, affiliated with the Brattle Street Church. He was born in Boston to William Cooper and Judith Sewall, attended the Boston Latin School, and was graduated from Harvard College in 1743.

In September 1746 he married Judith Bulfinch; they had two daughters.[3] A portrait of Cooper by John Singleton Copley now resides in the collection of the Massachusetts Historical Society.[4] 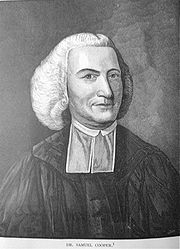