George Burgess (1829-1905) and Mary Crouch (1836-1862), the parents of Samual Edward Burgess, married on 8 March 1858; Mary Crouch was about 22 years old at the time. George Burgess was happy with his wife, but her mother and sister (Annie) bought only sorrow into the family and was cruel to his aged mother. About a year after their marriage Mary had a son (George William Burgess) who sadly died at 10 months old and was buried in Manchester on the 21st December 1859. In May 1861 Mary gave birth to their second son, Samual Edward Burgess (aka Eddie).

George, a prolific writer wrote fondly of his four daughters (by his second marriage) in his diary, but he never once mentioned is son, Eddie (Samual Burgess), in any of his writings, even though Eddie lived with the family for many years. The speculation being that Eddie, like his grandmother and Aunt (Annie) had a cruel streak to his nature. However, Samual Burgess (Eddie) appears in the census records and the family bible which is now with relatives (direct descendants of George Burgess) in Australia; and Eddie's sister-in-law, Gertrude Rosa Burgess, talked about him at great length to her granddaughter (Grace Baglin). Eddie’s mother (Mary Crouch) sadly died at the young age of 26 when he was only a year old; his mother was buried on 27th July 1862 in the Downend/Mangotsfield parish, Bristol.

Samual Edward Burgess aka Eddie, a Grocers Assistant, lived with his four half-sisters at the farmhouse at Latteridge, Iron Acton, Gloucestershire, and he was left in charge of them while their father (George Burgess) was at work as a Phrenologist in the Arcade, Bristol. George Burgess stayed in Bristol during the week and came home at weekends to see his family and to see that everything was ok.

According to his half-sister (Gertrude Rosa Burgess 1874-1958) Eddie had a cruel streak in him (towards animals) but he seemed alright with the girls (his half sisters). When she was young she found it difficult to form all her words properly and for a long time said "Tu afternoon" for 'this afternoon'. According to her Eddie tried very hard to teach her to speak properly and often lost his temper with her. At such time's she would run into the orchard, climb a tree and shout down at him from the top branches "Tu afternoon", over and over again; while he would stand below shaking his fists at her and getting into a rage.

They kept pigs and chickens on the farm and each week would have one or the other for their Sunday dinner, alternately. Eddie always did the slaughtering and as they grew older his half-sisters were taught how to pluck and clean, or singe and prepare the carcasses. A gun was kept over the fireplace, which on occasion Eddie used, when he went hunting; with the girls being banned from ever touching it. However on one occasion Gertrude Burgess, as the mischievous one, decided to try it out. She took it into the Orchard and tried to do the same as she'd seen her half-brother do but when she pulled the trigger the butt rebounded and smacked her so hard across the cheek she thought she broke all the bones in her face; she had a black eye and a badly bruised swollen face for days, and a hiding from Eddie for touching it in the first place. 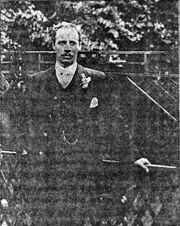