This is a composite family tree showing the frequently asserted, but largely unsupported relationships between the Wigton Walkers on one hand, and the Rutherford and Alleine families as related by White, 1902, WKR, and KRD. Also show is a purported connection to "the other" Reverand Samuel Rutherford. This later relationship is not the subject of this series of articles, and is provided only because it occassionally comes up in the context of the "Walker-Rutherford-Alleine Problem". Also, some of the relationships shown here, such as that between John Rutherford and James the Residenter of Utrecht, and between Isabella Alleine and Rev. Joseph Alleine, are the subject of dispute. The data marshalled in this series of articles may suggest that these relationships are not sound, and they certainly aren't proven, except for those folks for whom "belief" is the main criteria for proof. Bill 23:54, 22 August 2007 (UTC) 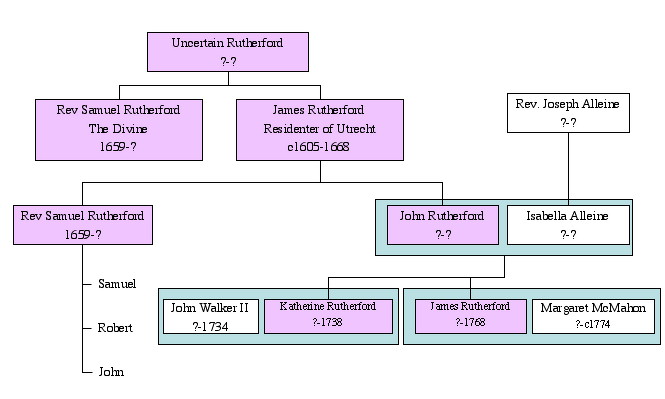 Retrieved from "https://familypedia.wikia.org/wiki/Rutherfordiana/Family_Tree?oldid=592744"
Community content is available under CC-BY-SA unless otherwise noted.