His father was a veterinarian who died of malaria when Valentino was 11. Rudolpho had an older brother, Alberto (1892–1981), a younger sister, Maria, and an older sister Beatrice who died in infancy.

As a child, Valentino was reportedly spoiled and troublesome. His mother coddled him while his father disapproved of his behavior. He did poorly in school, and was eventually enrolled in agricultural school at Genova where he received a degree.

After living in Paris in 1912, he soon returned to Italy. Unable to secure employment, he departed for the United States in 1913. December 9, 1913 Rudy leaves Italy on the U.S.S. Cleveland for America. He was processed at Ellis Island at age 18 on December 23, 1913.

Arriving in New York City, Valentino soon ran out of money and spent a period of time on the streets. He supported himself with odd jobs such as bussing tables in restaurants and gardening. Eventually, he found work as a taxi dancer at Maxim's.

In 1917, Rudolph Valentino joined an operetta company that traveled to Utah where it disbanded. He then joined an Al Jolson production of Robinson Crusoe Jr., travelling to Los Angeles. By fall, he was in San Francisco with a bit part in a theatrical production of Nobody Home. While in town, Valentino met actor Norman Kerry, who convinced him to try a career in cinema, still in the silent film era.

In 1919, just before the rise of his career, Valentino impulsively married actress Jean Acker who was involved with actress Grace Darmond and Alla Nazimova. Acker got involved with Valentino in part to remove herself from the lesbian love triangle, quickly regretted the marriage, and locked Valentino out of their room on their wedding night. The couple separated soon after, the marriage never consummated. The couple remained legally married until 1921, when Acker sued Valentino for divorce, citing desertion. The divorce was granted with Acker receiving alimony. She and Valentino eventually renewed their friendship. The two remained friends until his death.

Valentino first met Winifred Shaughnessy, known by her stage name, Natacha Rambova, an American silent film costume and set designer, art director and protégée of Nazimova, on the set of Uncharted Seas in 1921. The two worked together on the Nazimova production of Camille, by which time they were romantically involved. They married on May 13, 1922, in Mexicali, Mexico, which resulted in Valentino's arrest for bigamy since he had not been divorced for a full year, as required by California law at the time. Days passed and his studio at the time, Famous Players-Lasky, refused to post bail. Eventually, a few friends were able to post the cash bail.

Having to wait the year or face the possibility of being arrested again, Rambova and Valentino lived in separate apartments in New York City, each with their own roommates. On March 14, 1923, they legally remarried.

Many of Valentino's friends disliked Rambova and found her controlling. During his relationship with her, he lost many friends and business associates, including June Mathis. Toward the end of their marriage, Rambova was banned from his sets by contract. Valentino and Rambova divorced in 1925. The end of the marriage was bitter, with Valentino bequeathing Rambova one dollar in his will.

On August 15, 1926, Valentino collapsed at the Hotel Ambassador in New York City, New York. He was hospitalized at the Polyclinic in New York and an examination showed him to be suffering from appendicitis and gastric ulcers which required an immediate operation. Despite surgery Valentino developed peritonitis. On August 18 his doctors gave an optimistic prognosis for Valentino and told the media that unless Valentino's condition changed for the worse there was no need for updates.

However, on August 21 he was stricken with a severe pleuritis relapse that developed rapidly in his left lung due to the actor's weakened condition. The doctors realized that he was going to die, but, as was common at the time with terminal patients, decided to withhold the prognosis from the actor who believed that his condition would pass. During the early hours of August 23, Valentino was briefly conscious and chatted with his doctors about his future. He fell back into a coma and died a few hours later, at the age of 31.

Valentino's funeral Mass in New York was held at Saint Malachy's Roman Catholic Church, often called "The Actor's Chapel", as it is located on West 49th Street in the Broadway theater district, and has a long association with show business figures.

After the body was taken by train across the country, a second funeral was held on the West Coast, at the Catholic Church of the Good Shepherd in Beverly Hills. Valentino had no final burial arrangements and his friend June Mathis offered her crypt for him in what she thought would be a temporary solution. However, she died the following year and Valentino was placed in the adjoining crypt. The two are still interred side by side in adjoining crypts at the Hollywood Memorial Park Cemetery (now the Hollywood Forever Cemetery) in Hollywood, California. 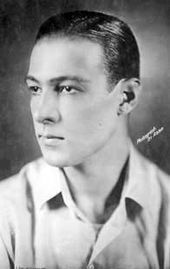