Roerichism (Russian: Рерихи́зм) is a spiritual, cultural and social movement that emerged in the United States in the first half of the twentieth century. The movement centers on the religious doctrine of Agni Yoga. Agni Yoga draws ideas from Theosophy, Eastern and Western religions, Vedic and Buddhist traditions, molding them into Russian culture, too.

This movement played a significant role in bringing knowledge of Asian religions to the Western world. Roerichism has an international following and has many thousands of adherents. Some international and regional organizations, whose activity is based on the ideas of Roerichism, arose many years after the death of all the members of the Roerich family. Roerichism has exerted an influence on other esoteric movements and philosophies, among them New Age and Transhumanism.

Helena Roerich (1879–1955) was a Russian theosophist, writer, and public figure. In the 20th century, she created, in cooperation with the Teachers of the East Masters of the Ancient Wisdom, the teaching of Agni Yoga.

Helena was born in the family of Ivan Shaposhnikov, a well-known Russian architect. He was one of the authors of the project of the Great Choral Synagogue in Saint Petersburg. Helena's mother, belonged to an ancient Golenischev-Kutuzov family, which originated from Novgorod at the end of the 13th century. Significant members of this family included knyaz Mikhail Kutuzov, field marshal of the Russian Empire; Arseny Golenishchev-Kutuzov, poet of the end of the 19th century; Ilya Golenishchev-Kutuzov, a philologist and poet; and Modest Mussorgsky, a well-known composer. It was a nobiliary family, distinguished not only for its nobility but for its cultural traditions too.

Nicholas Roerich (1874–1947) was a theosophist, philosopher, painter, writer, archaeologist, and public figure. He is perceived by some people as a spiritual teacher and guru.[2]

George Roerich (Russian: Юрий Николаевич Рёрих, pronounced [ˈjʉrʲɪj nʲɪkəˈlajɪvʲɪtɕ ˈrʲɵrʲɪx]; August 16, 1902 in Novgorod Oblast, Russian Empire – May 21, 1960 in Moscow). George was the son of the Nicholas Roerich and Helena Roerich.The name "George" is a commonly used English equivalent of the Russian name "Yuri". George's work encompassed many areas of Tibetan studies, but in particular he is known for his contributions to Tibetan dialectology, his monumental translation of the Blue Annals, and his 11-volume Tibetan-Russian-English dictionary (published posthumously).[3]

Svetoslav Roerich (Russian: Светослáв Рéрих; 23 October 1904 – 30 January 1993), Russian and Indian painter, son of Helena Roerich and Nicholas Roerich, studied from a young age under his father's tutelage.[4] He studied architecture in England in 1919 and entered Columbia University's school of architecture in 1920. He won the Grand Prix of the Sesquicentennial Exposition in Philadelphia in 1926.

The term Agni Yoga means "Mergence with Divine Fire" or "Path to Mergence with Divine Fire". This term was introduced to the Western public by Nicholas Roerich and Helena Roerich. Agni is the Vedic and Living Ethics' "god of fire", who marks immortality and is the symbol of life. Agni is one of the highest gods in the Rigveda. In Agni Yoga it is the creative fire of the universe, the root of the "Fire of Space"; and the "psychic energy", the powers of the human mind and heart, particularly those manifesting in love, thought, and creativity.[5] In the original myth found in many Indo-European cultures Agni is a bird-like being, that brings fire from the gods to mankind. Alternatively, this messenger brings an elixir of immortality from Heaven to Earth. In the early Vedic literature, Agni primarily connotes fire as a god, reflecting the primordial powers to consume, transform and convey.[6]

Yoga is one of the six orthodox schools of Hindu philosophy. There is a broad variety of yoga schools, practices, and goals in Hinduism and Buddhism. Yoga is a group of spiritual, mental, and physical practices or disciplines which originated in ancient India. The term Yoga has been applied to a variety of practices and methods.[7]

"Pax Cultura" ("Peace through Culture") is the motto of the cultural artifact protection movement founded by Roerich family, and is symbolized by a maroon on white emblem consisting of three solid circles in a surrounding circle. On April 15, 1935 the Roerich Pact was signed by the United States and Latin American nations, agreeing that "historic monuments, museums, scientific, artistic, educational and cultural institutions" should be protected both in times of peace and war, and identified by their flying a distinctive flag, the Banner of Peace, bearing the Pax Cultura emblem.

The Banner of Peace symbol has ancient origins. Perhaps its earliest known example appears on Stone Age amulets: three dots, without the enclosing circle. Roerich came across numerous later examples in various parts of the world, and knew that it represented a deep and sophisticated understanding of the triune nature of existence. But for the purposes of the Banner and the Pact, Roerich described the circle as representing the totality of culture, with the three dots being Art, Science, and Religion, three of the most embracing of human cultural activities. He also described the circle as representing the eternity of time, encompassing the past, present, and future. The sacred origins of the symbol, as an illustration of the trinities fundamental to all religions, remain central to the meaning of the Pact and the Banner today."[8]

The Roerich Pact sign was superseded by the distinctive marking of cultural property as defined by the Hague Convention for the Protection of Cultural Property in the Event of Armed Conflict. However, the emblem of the Roerich Pact is still a valid protective sign in the relations between the ten states which are bound by the Pact.

Many works of Nicholas Roerich and Svetoslav Roerich, as artists, are thematically related to Agni Yoga. Roerich's artistic works tell about the internal needs of the individual and about the ways of their realization. Roerich's paintings are a kind of "Teaching of Life", on the spiritual development of mankind, about culture and its role in human life. They are a conversation about the eternity.[9] German-born New Age and ambient musician Karunesh (Bruno Reuter) believes that Roerich's paintings have healing properties. The same opinion was expressed earlier by Victor Skumin.[10][11] 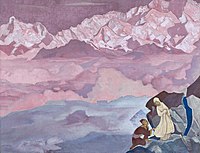 Nicholas Roerich. She who leads. 1943

Nicholas Roerich. She who holds the World. 1933

Nicholas Roerich. Precept of the Teacher. 1947 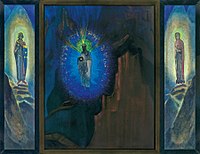 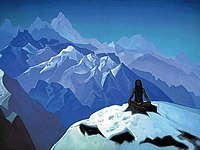 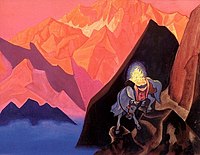 Nicholas Roerich. Milarepa, the One Who Harkened. 1925 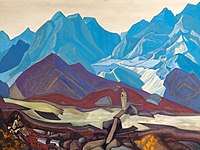 Nicholas Roerich. From Beyond. 1936

Nicholas Roerich. Guru Guri Dhar (The Path of the Guruji of the Gurus). 1931
Add a photo to this gallery

Retrieved from "https://familypedia.wikia.org/wiki/Roerichism?oldid=1545175"
Community content is available under CC-BY-SA unless otherwise noted.