Familypedia
Register
Don't have an account?
Sign In
Advertisement
in: Famous people, Ensko (surname), Died in 1934,
and 2 more

Charlotte remarried after William's death. Her new husband was Albert Moore (1822-?) and her children moved into his house.

The family appears in the 1870 and 1880 US Census living in Manhattan.

Robert senior started a family business of dealing in antique silver in New York and his son, Stephen Guernsey Cook Ensko, who would eventually publish three books on American silversmiths and their marks. His book is entitled: Makers of Early American Silver, New York, 1915. Some of Robert's correspondences with Heinrich Schwarz are archived at the Rhode Island School of Design, Museum of Art, Providence, Rhode Island. Some other letters are archived with the Bernard M. Bloomfield Papers, 1743-1963 archived at the Winterthur in Delaware. One letter is dated January 7, 1917 and is addressed to Maurice Brix and concerns "the earliest date for the firm of H.I. Pepper and Sons". Other letters between Maurice Brix and Hollis French dated: February 18, 1927; March 4, 1927; and April 4, 1927 inquire about Robert Ensko's publications. Robert appears in the 1920 and 1930 Manhattan Directory dealing in "antiques" at 682 Lexington Avenue and living at 799 Park Avenue.

He is thought to have died in 1934 but his wife is listed as a widow in the 1910 United States Census. 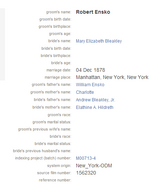