Announcer for Music and the Spoken Work, LDS Apostle, President of Rotary International

Richard Louis Evans was a member of the Quorum of the Twelve Apostles of The Church of Jesus Christ of Latter-day Saints (LDS Church) (1953–71); the president of Rotary International (1966–67); and the writer, producer, and announcer of Music and the Spoken Word for forty-one years (1929–71).

Evans was born in Salt Lake City, Utah. He received Bachelor and Master of Arts degrees from the University of Utah. There, he joined Pi Kappa Alpha.

He may have been best known as the announcer for the weekly Mormon Tabernacle Choir radio broadcast, Music and the Spoken Word: every week, he wrote, produced, and announced the radio broadcasts, including a short inspirational message. Evans's weekly broadcasts spanned from its inception in 1929 until his death in 1971.

Evans's voice was familiar to Latter-day Saints as the narrator of various church productions, most notably Man's Search for Happiness.

"To millions he was the image of the Church. To multitudes of persons who were not well acquainted with the theology of The Church of Jesus Christ of Latter-day Saints, he was the only church they knew and the only religion they formally experienced. Countless others arranged their worship around his broadcasts. The impact of his personality was, if anything, even greater as he stood in person before numerous audiences across the earth and in his own inimitable way taught men the meaning of life and called them to repentance and to a greater sense of responsibility to themselves, to each other, and to God." (Marion D Hanks)

Evans was ordained an apostle on October 8, 1953, following the death of Albert E. Bowen. 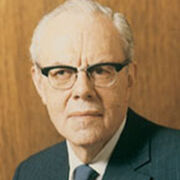