The oral family tradition has been that his name was garbled when he entered the USA. His original name may have been "Gleason", but with his thick Gaelic accent it sounded like "Gelchion" and that's how it was recorded into English. The name is unique in America so everyone with the Gelchion name is descended from Richard or married to a descendant of Richard. Almost every Gelchion listed in the Social Security Death Index, Census, Saint Paul's Roman Catholic Church Book, and Holy Name Cemetery Sexton Records has been identified.

Richard Gelchion I, emigrated from County Meath, Ireland around 1850.

He appears in the 1880 US Census living at Jersey City, Hudson County, New Jersey with his wife and children. In the year 1900 he is living at 56 Rose Avenue in Jersey City in the home of his son-in-law, Michael Dermody and his daughter, Anna Katherine Gelchion. Also in the household is Anne's brother, John Gelchion who never married.

He was buried on March 17, 1904 in Holy Name Cemetery under the name "Rich Gilchion".

Richard Arthur Norton (1958- ) writes: Most of the Gelchion information comes from the Saint Paul's Roman Catholic Church marriage and baptismal records, and from Holy Name Cemetery burial records, both these sources have been microfilmed. These two sources have not been fully exploited and a second reading may provide more information. The relationship of the Gelchions to the Carrs and Conboys of Ireland was first made on April 06, 2001 when I interviewed Christopher Aloysius Enright II (1927- ) in his home at 27 Eaglecrest Place, Oakland, New Jersey. He gave me some information on the Conboys and let me make copies of an autograph book that belonged to Margaret Agnes Conboy (1866-1951). The book listed her siblings and had short messages from Ann Hogan and B. Conboy, that were signed "your cousin". He told me that there was a Gelchion woman (I was spelling it phonetically as "Gelchin") that was related to Sarah Jane Carr (1863-1950), my great-grandmother. This Gelchion woman had three children: The first child was Jane Gelchion who married Patrick Cryan and they lived in Rutherford, New Jersey. The Cryans had two children, Tommy and Jane, and Tommy played football. The second child was Kitty Gelchion and she married a Morgan and they moved to Beacon, New York and had lots of kids. The third child was Winifred Gelchion and she was married to Joe Fuerey (or Fuehry). He thought Joe may have died around 1925 and he remembered that she bought a house on Danforth Avenue in Jersey City that she rented to Irish immigrants that were working in the Bayonne refinery. On September 11, 2002, the one year anniversary of the World Trade Center attack, I was taking a break from work and tried looking up the Gelchions again using my spelling of "Gelchin", and again nothing turned up. All week I was thinking of how this side of the family was a brick-wall and I should give up. I looked at my notes again, then I searched for every "Winifred" as a first name in Jersey City and then I tried searching for Patrick Cryan in the 1930 Census. The census had been online only about a month and the New Jersey portion was online for a week or so. I didn't even know the time frame for him so it was just out of desperation that I searched in the 1930 Census. Only one name came up and it was in Rutherford, New Jersey. When I looked at the census image I was amazed to see "Jane Gelchion, mother-in-law" living in the same house. I searched under the correct spelling of "Gelchion" at ancestry.com and found one entry from Deirdre Robinson and it had Matthew Gelchion marrying Jane E. Hogan at Saint Paul's in Jersey City, the same place where Patrick Norton married Sarah Carr. Jane E. Hogan's father was John Hogan and he had married Winifred Conboy in Ireland. I searched for Gelchion in the online phone book and called "M. Gelchion in Bayonne". She said her father-in-law sent her a genealogy and that the other New Jersey Gelchions were related to her husband. She didn't know any Hogans or any Gelchions in Rutherford. I gave her my number and she called her father in Florida. She called me back in 5 minutes and said her father wanted to talk to me. 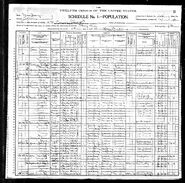 1900 census
Add a photo to this gallery
Retrieved from "https://familypedia.wikia.org/wiki/Richard_Gelchion_I_(1832-1904)?oldid=1514997"
Community content is available under CC-BY-SA unless otherwise noted.