In 1880 the family was living in Jersey City.

On November 25, 1885 Richard married Catherine A. Farley (1861-1934) aka Katie Farley, at Saint Paul's Roman Catholic Church at 14 Greenville Avenue, Jersey City, New Jersey. They were listed under their latin names as: "Riccardum Gelchion" and "Catherinae A. Farley".

He was buried in Holy Name Cemetery with his wife and two of his children. 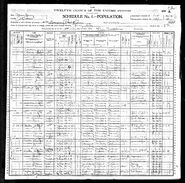 1900 census
Add a photo to this gallery
Retrieved from "https://familypedia.wikia.org/wiki/Richard_Gelchion_II_(1860-1944)?oldid=684270"
Community content is available under CC-BY-SA unless otherwise noted.