General Richard Arnold was a career U.S. Army officer who served as a brigadier general in the Union forces during the American Civil War. His artillery helped force the surrender of two important Confederate towns, including Mobile, Alabama.

Arnold was the son of Rhode Island governor and United States congressman Lemuel Arnold, was born in Providence, Rhode Island, in 1828, graduated from the United States Military Academy in 1850.[1] His classmates included Eugene A. Carr and Cuvier Grover, who would serve alongside him in the Trans-Mississippi Theater during the Civil War. His antebellum service included various routine posts in Florida, California, and the Pacific Northwest. Arnold was promoted to captain in the Regular Army and became an aide-de-camp to Major General John E. Wool.

Civil War Union Brigadier General. He graduated from the United States Military Academy at West Point, New York in 1850, placing 13th out of 44 (his class included future Union Generals Gouverneur K. Warren, Eugene A. Carr and Cuvier Grover, as well as future Confederate Generals Lucius M. Walker, Robert Ransom, and Charles S. Winder). He served in various posts in the American Northwest after graduation, and was an Aide-de-Camp to Brigadier General John E. Wool at the start of the Civil War.

Shortly after the start of the Civil War, Arnold commanded Battery D of the 2nd U.S. Artillery at the First Battle of Bull Run, and was forced to abandon his guns during the ensuing Union rout. In 1862, he served in various staff positions with the Army of the Potomac, including as a division artillery chief and Assistant Inspector General for the VI Corps.

After the Seven Days Battles, he received a commission as a brigadier general of the volunteers and was transferred to the Department of the Gulf, where he was assigned as Chief of Artillery. He served in this capacity for two years, except for a two-month temporary stint as Chief of Cavalry after Brig. Gen. Albert L. Lee was relieved from duty during the Red River Campaign. At the Siege of Port Hudson, Arnold directed the siege artillery that precipitated the surrender of the fort and town. He later commanded the artillery that would compel the surrender of Mobile, Alabama. He received a brevet promotion to major general dating from March 1865.

In May 1861, he was promoted to Captain in the 5th United States Regular Artillery, and was placed in command of Battery D, 2nd United States Artillery. In the July 1861 1st Battle of Bull Run, when the Union forces had been driven back in a rout, he was forced to abandon his guns near Warrenton Pike when, while attempting to flee in the midst of an artillery barrage, his field peices became obstructed by vehicles which had been abandoned by other Union troops.

In March 1862 he was assigned as Chief of Artillery for the 1st Division of the Army of the Potomac, but in May of that year he became the Acting Assistant Inspector General of the VI Corps. In this capacity he participated in the Peninsular Campaign, seeing action at the Battles of Savage's Station (where he earned the brevet of Major, US Regular Army), Glendale and Malvern Hill. On November 29, 1862 he was promoted to Brigadier General, US Volunteers and was made Chief of Artillery for the Department of the Gulf. In that role he would serve in for almost two full year, being interrupted only by a 2-month stint as the Department's Cavalry Chief.

He directed the Union artillery that participated in the siege and capitulation of Port Hudson, Mississippi, and in the operations that culminated in he capture of Fort Morgan in Mobile Bay, Alabama. On March 13, 1865 he was brevetted Major General in both the Volunteers and Regular Army.

Upon his August 1865 muster out of the Volunteer service, he returned to his Regular Army rank of Captain, and served at the rank for the next 10 years, finally earning a promotion to Major in 1875. In November 1882, while stationed on Governor's Island in New York City, he was promoted to Lieutenant Colonel, but died five days later. 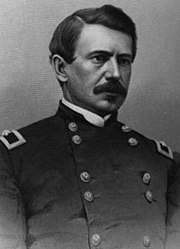