In the slave societies of the Americas, a quadroon or quarteron was a person with one quarter African and three quarters European ancestry (or in Australia, one quarter aboriginal ancestry).

Governments of the time sometimes incorporated the terms in law, defining rights and restrictions. The use of such terminology is a characteristic of hypodescent, which is the practice within a society of assigning children of mixed unions to the ethnic group which the dominant group perceives as being subordinate.[1] The racial designations refer specifically to the number of full-blooded African ancestors or equivalent, emphasizing the quantitative least, with quadroon signifying that a person has one-quarter black ancestry.

The word quadroon was borrowed from the French quarteron and the Spanish cuarterón, both of which have their root in the Latin quartus, meaning "a quarter".

Similarly the Spanish cognate cuarterón is sometimes used to describe someone whose racial origin is three-quarters white and one-quarter Indian, especially in Caribbean South America.[2]

The term mulatto was used to designate a person who was biracial, with one pure black parent and one pure white parent, or a person whose parents are both mulatto.[3] In some cases, it was used as a general term, for instance on US census classifications, to refer to all persons of mixed race, without regard for proportion of ancestries.

The term octoroon referred to a person with one-eighth African/Aboriginal ancestry;[4] that is, someone with family heritage equivalent to one biracial grandparent; in other words, one African great-grandparent and seven European great-grandparents. As with the use of quadroon, this word was applied to a limited extent in Australia for those of one-eighth Aboriginal ancestry, as the government implemented assimilation policies on the Stolen generation.

Terceron was a term synonymous with octoroon, derived from being three generations of descent from an African ancestor (great-grandparent).[5] The term mustee was also used to refer to a person with one-eighth African ancestry.

The term sacatra was used to refer to one who was seven-eighths black or African and one-eighth white or European (i.e. an individual with one black and one griffe parent, or one white great-grandparent).[6]

The term mustefino refers to a person with one-sixteenth African ancestry.[3] The terms quintroon or hexadecaroon were also used.

Three generations in the same family 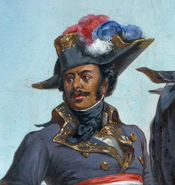 Alexandre Dumas, fils: octoroon
In the French Antilles, the following terms were used[7][8][9] during the 18th century:

In Latin America, the terms griffe or sambo were sometimes used for an individual of three-quarters black parentage, i.e. the child of a Mulatto parent and a fully black parent.[3]

During the antebellum period in the United States, abolitionists featured mulattoes and other light-skinned former slaves in public lectures in the North, to arouse public sentiments against slavery by showing Northerners slaves who were visually indistinguishable from them. This prevented them, the audience, from putting slaves into a category of "other", and not related to them in their society.[10]

Retrieved from "https://familypedia.wikia.org/wiki/Quadroon?oldid=1476147"
Community content is available under CC-BY-SA unless otherwise noted.