Laura Cowan Blaine provides a family tree for her own line of descent from the John Cowan who was killed by Indians, and whose wife was taken captive. Mrs. Blaine is not entirely sure of his first name, saying only that her father thought his grandfather's name was John. Mrs. Blaine does not give her own fathers first name in her presentation, but we know from census records that his name was "John M. Cowan". This point is significant because it links Mrs. Cowan's lineage to that given by JB Cowan who identifies "John M. Cowan" as a descendant of the John Cowan who was KBI'd. The source material for Mrs. Blaine's account is provided elsewhere in this series 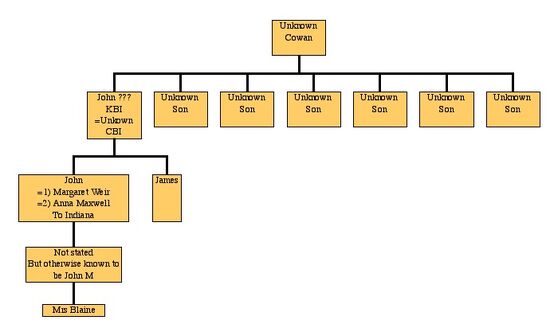 Retrieved from "https://familypedia.wikia.org/wiki/Portal:Indian_Captivity_Stories/Mrs._Blaines_Tree?oldid=1187126"
Community content is available under CC-BY-SA unless otherwise noted.