Pomeranian Voivodeship, or Pomerania Province[1] (in Polish województwo pomorskie [vɔjɛˈvut​͡stfɔ pɔˈmɔrskʲɛ]), is a voivodeship, or province, in north-central Poland. It comprises most of Pomerelia (the easternmost part of historical Pomerania), as well as an area east of the Vistula River. The western part of the province, around Słupsk, belonged historically to Farther Pomerania, while Pomerelia and the eastern bank of the Vistula belonged to the historical region of Prussia. The central parts of the province are also known as Kashubia, named after the Kashubian minority. The provincial capital is Gdańsk.

Gdańsk, the regional capital, forms part of the Tricity of Sopot, Gdańsk and Gdynia. The voivodeship also includes the narrow Hel Peninsula and the Polish half of the Vistula Spit. Other tourist destinations include Sopot, Jurata, Łeba, Władysławowo, Puck, Krynica Morska, Ustka, Jastarnia, Kuźnica, Bytów and many fishing ports and lighthouses.

The voivodeship contains 42 cities and towns. These are listed below in descending order of population (according to official figures for 2006[2] ):

Pomeranian Voivodeship is divided into 20 counties (powiats): 4 city counties and 16 land counties. These are further divided into 123 gminas.

The counties are listed in the following table (ordering within categories is by decreasing population). 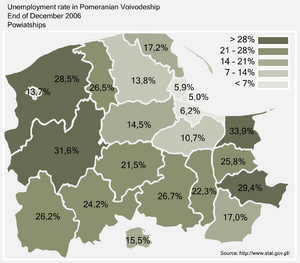 Protected areas in Pomeranian Voivodeship include two National Parks and nine Landscape Parks. These are listed below.