Familypedia
Register
Don't have an account?
Sign In
Advertisement
in: Ockenfels (surname), Born in 1868, Died in 1938,
and 9 more

In 1881, at the age of 13, Peter immigrated to the United States with his parents. They settled in Norway, Iowa and farmed land there. He married in Iowa and started a family. In 1904 he moved to Currie, MN with his wife and the eldest five of his fifteen children. He farmed land in Minnesota until his death in 1938.

He lost his last two children in infancy and a daughter, Rose, to tuberculosis at the age of twenty four. His daughter, Agnes, gave birth to twins in the last month of his life, only one survived. Peter and his family knew he was dying when the twins were born, so they waited to bury little Margaret until his passing so they could be buried together the following month. 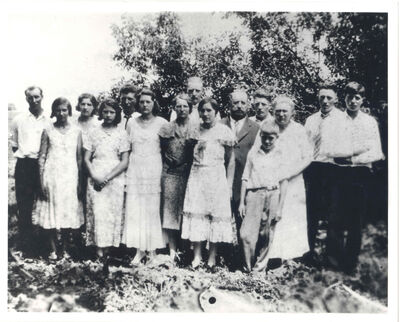 1920 Census. Peter and Adelheid Ockenfels on bottom of this page, their children listed at top of next.