Peleg (or Pheleg) (Hebrew: פֶּלֶג‬ / פָּלֶג‬, Modern Péleg / Páleg Tiberian Péleḡ / Pāleḡ, "division") is mentioned in the Hebrew Bible as one of the two sons of Eber, an ancestor of the Israelites, according to the "Table of Nations" in Genesis 10-11 and 1 Chronicles 1. Peleg's son was Reu, born when Peleg was thirty, and he had other sons and daughters. According to the Hebrew Bible, Peleg lived to the age of 239 years. (Genesis 11:16-19)

In the Septuagint and some Christian Bibles derived from it, Peleg is called Phaleg and his father is called Heber. His son is called Ragau, born when Phaleg was 130 years old, and he had other sons and daughters. According to the Septuagint, Phaleg lived to an age of 339 years. (Septuagint Genesis 11:16-19) Modern translations generally use the names and dating as in the Masoretic Hebrew text. (compare Genesis 11:16-19)

Peleg is a common surname in Israel, also being the root lettering for sailing (lehaflig להפליג) and a military half-bivouac tent (peleg-ohel פלג אוהל). The meaning of Peleg in English is "brook", a little river.

25 And unto Eber were born two sons: the name of one was Peleg; for in his days was the earth divided; and his brother’s name was Joktan.
Genesis 10:25

And the Earth was divided:

According to Genesis 10:25 and 1 Chronicles 1:19, it was during the time of Peleg that "the earth was divided" – traditionally, this is often assumed to be just before, during, or after the failure of Nimrod's Tower of Babel. The meaning of the earth being divided is usually taken to refer to a patriarchal division of the world, or possibly just the eastern hemisphere, into allotted portions among the three sons of Noah for future occupation, as specifically described in the Book of Jubilees, Biblical Antiquities of Philo, Kitab al-Magall, Flavius Josephus,[1] and numerous other antiquarian and mediaeval sources, even as late as Archbishop Ussher, in his Annals of the World.[2] One account, the Conflict of Adam and Eve with Satan, states that "In the days of Phalek (Peleg), the earth was divided a second time among the three sons of Noah; Shem, Ham and Japheth" – it had been divided once previously among the three sons by Noah himself.[3]

Some Young Earth Creationists interpret this verse to refer to the continent of Pangaea split into modern continents.[4] 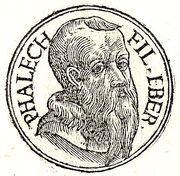