Patrick J. Norton (1855-1905) was an immigrant from Ireland to the Boston in the United States around 1880. He moved from Boston to New Jersey and worked as a laborer on the railroad, where he died of septicemia at age 49. (b. Saint Patrick's Day, March 17, 1855; County Galway, Ireland - d. October 9, 1905; Saint Francis Hospital, Jersey City, Hudson County, New Jersey, USA)

Patrick was born on Saint Patrick's Day, March 17, 1855 in County Galway, Ireland to Michael Norton and Bridget Mulligan. The exact town where he was born is not known, but it should be able to be determined once the Ireland church baptism records are searchable online. Civil registration of births, marriages, and deaths did not begin in Ireland until 1864. Previous to that year events were recorded by the church.[1]

The city in County Galway of Patrick's birth has not yet been determined. He emigrated to Boston, Massachusetts in 1880 and was joined by his brother, John Norton, in 1882. Patrick became a US citizen in 1888, while in Boston, where he was working as a laborer.

Patrick worked for the railroad in Hoboken as a fireman. The railroad fireman would add coal to the fire to make the steam that drove the engine. This work may have helped his son get a job at the railroad when Patrick died in 1905.

Patrick married Sarah Jane Carr (1863-1950) of Hollygrove, Ireland on April 13, 1890 at Saint Paul's Roman Catholic Church at 14 Greenville Avenue in Jersey City, New Jersey. He was 32 years old. Sarah was the daughter of Thomas Carr I (c1840-bef1901) and Bridget Conboy (1841-aft1901). Patrick was living at 12 Bright Street in Jersey City at the time of his marriage. Living with him was his brother, Matthew Norton. In the marriage records of the church their names were latinized as: "Patricum Norton" and "Saram Carr".

Patrick and Sarah had five children and three lived to adulthood:

In the year 1900 the family was living at 101 Bright Street in Jersey City. Pat died in 1905 at Saint Francis Hospital, Jersey City, New Jersey when living at 554 Grove Street. The cause of death was "pyonephritic septicemia". Four months earlier, his brother, John Norton, had died.

His funeral notice was in the Evening Journal on Tuesday, October 10, 1905 and reads as follows: "Norton - On Monday, October 9, 1905, Patrick, beloved husband of Sarah Norton. Relatives and friends are requested to attend his funeral from his late residence, 554 Grove Street, on Wednesday at 9 a.m.; thence to St. Lucy's Church, where a high mass of requiem will be offered."

His wife, Sarah, lived until the year 1950 and always dressed in black, as a widow, since she never remarried. Sarah bought two brand-new two-family houses around 1920 with money that she said came from Pat's death. The source of the money has always been a mystery. It is not known if he had an insurance policy, but it is doubtful. Thomas Patrick Norton II (1920-2011) mentioned that he saw one of the units of the two-family house being used to count money and was filled with bags of slips of papers. He thought that the house may have been used by Newsboy Moriarty as one of his counting houses for the numbers game, and other forms of illegal betting.

No identified picture of Patrick is known to exist. A photocopy of his naturalization certificate survived in the family archive. A tintype that may be of him and his family exists but no one is identified in the image.

1880 US census (if he migrated before the census) 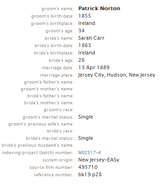 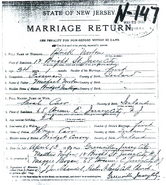 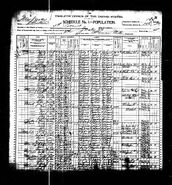 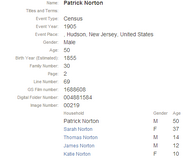 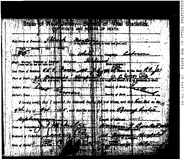 Tombstone
Add a photo to this gallery
Retrieved from "https://familypedia.wikia.org/wiki/Patrick_J._Norton_(1855-1905)?oldid=1452707"
Community content is available under CC-BY-SA unless otherwise noted.