Otto spent about a year and a half on the Isle of Pines in Cuba from 1910 until March 26, 1912. He returned to the US with his sister Maria Winblad and lived with her.

In 1914 his parents took him to visit family in Norway and Sweden. Both his parents died on that trip in Farsund, Norway and he returned to live with his sister, Maria, in Jersey City on July 06, 1915 from Norway. On the same day, his older brother, Anton returned from Cuba to New York City for Otto's arrival.

Otto served in the US Army 101st Signal Battalion after World War I.

Six days after Geraldine's birth, on May 20, 1928, Helen Hollenbach died from post-birth complications. Otto and Geraldine then moved in with Otto's sister, Maria Winblad.

In 1929 Otto took his sister, Maria, and her two oldest children, on a car trip to Chicago, Illinois and from there they traveled to Lake Geneva, Wisconsin. The trip was to visit their aunt on their mother's side: Lena Olson (1860-1938) who was married to Andrew Havig Jensen.

In 1930 Otto was living with his sister Maria, and Geraldine may be living with the Hollenbachs in Bayonne. In 1932 Otto was working for the New York Daily Mirror newspaper as a stereotyper.

In 1975 Otto retired from the newspaper and moved to 111 Woodchuck Parkway in Whiting, New Jersey and lived in a trailer park in a double sized trailer.

Otto died on November 17, 1977 at Community Memorial Hospital in Toms River, New Jersey and he was buried at George Washington Memorial Park in Paramus, New Jersey with Leah, his second wife.

His obituary appeared in the Asbury Park Press on November 18, 1977 and read as follows: 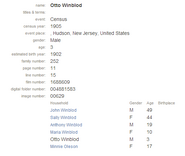 1977 death certificate
Add a photo to this gallery

1920 circa in Bronx or Jersey City 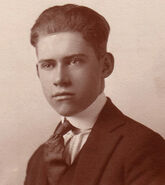 Retrieved from "https://familypedia.wikia.org/wiki/Otto_Perry_Winblad_(1902-1977)?oldid=1456085"
Community content is available under CC-BY-SA unless otherwise noted.