Jacob and his family emigrated to the United States in June of 1898.

Ole married Doris Elizabeth Wilkens (1901-1980) on January 5, 1918 in Pleasant View, Norman County, Minnesota. Her parents were from Germany. She was born in Minnesota. Doris' sister, Martha Wilkens, was married to Ole's brother Emil.

He was a telegrapher and later a depot agent for the Great Northern Railroad from 1912 to 1948.

In 1930 the family was living in Lockhart Township, Norman County, Minnesota with their children: Edna Mae Williamson; and Gladys Marilyn Williamson. They were paying $15 a month in rent. Ole was working as a "station agent" for the railroad. He listed that he had emigrated in 1898.

He was buried in Immanuel Cemetery, Norman County, Minnesota. 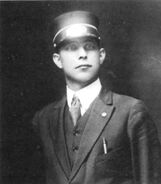