Edit Facts
Nicolo (Nicholas) LaBarbera was born about 1845 in Villarosa, Enna, Sicily, Italy to unknown parents. Nicola never learned to read or write. He married Mary LaPorto in the 1870s or 1880s.

Nicholas and his family lived in Villarosa until they left for the United States in 1909. He stood at 5' 3.5" as of August 1909. At the time of the immigration, Nicholas was unemployed. He paid the passage for himself, his wife, and two children. They left from Palermo on the S.S. Regina D'Italia. On August 19, 1909, Nicholas, his wife Mary, three children, and one grandchild arrived at Ellis Island. They joined son in-law Angelo Conti in Pennsylvania. In 1911, Nicholas, Mary, and their daughter moved back to Sicily. However, they left to return to the United States on the S.S. America. They departed Palermo and arrived in New York on June 9, 1914. From there, Nicholas and Mary went to join three of their sons in Jamestown, New York. They were living in Jamestown in the 1920 census. Nicholas died sometime in the 20th century. 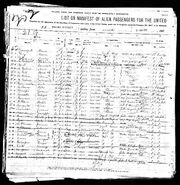 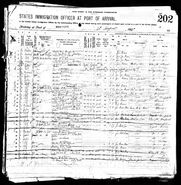 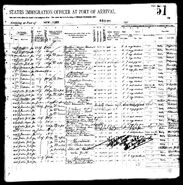 1920 census
Add a photo to this gallery