Narimantas or Narymunt (baptized Gleb, born just before 1300 (according to Wasilewski 1992) – February 2, 1348) was the second eldest son of Gediminas, Grand Duke of Lithuania. During various periods of his life, he ruled Pinsk and Polotsk. In 1333 he was invited by Novgorod's nobles to rule and protect territories in the north, Ladoga, Oreshek and Korela.[1] He started the tradition of Lithuanian mercenary service north of Novgorod on the Swedish border that lasted until Novgorod's fall to Moscow in 1477.[2]

About 1338, the Golden Horde took him as prisoner. The Muscovite ruler, Ivan Danilovich Kalita, ransomed him from Tatars, keeping him as hostage in Moscow for a few years.

Narimantas supported his brother Jaunutis when he was deposed by Algirdas and Kęstutis in 1345. In order to avoid getting killed by his younger brothers, he escaped from Vilnius in autumn 1344. Narimantas travelled to Jani Beg, Khan of the Golden Horde, asking for support against Algirdas. Though he failed to solicit support, he is rumoured to have married a Tatar princess.[3] (possibly as second wife.) After returning, Narimantas reconciled with Algirdas and was killed leading the Battle of Strėva against the State of the Teutonic Order on February 2, 1348.

He was baptised in 1333 in Veliki Novgorod. This made him ineligible to succeed his father as ruler of Lithuanians, despite his primogeniture right.[4]

It is believed that Narimantas had five sons:[5]

The Polish genealogist and historian Józef Puzyna (see Dr. Jozef ks. Puzyna, article series on Narimantas, in: Miesiecznik Heraldyczny, 1930-31) refutes strongly the claim that Narimantas' progeny would gave been born of a Tatar wife. He advances a hypothesis that the names of Narimantas' sons indicate that their mother was an Orthodox Ruthenian lady. 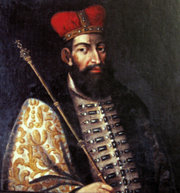