This article is about the district. For its eponymous headquarters, see Nalgonda.

Nalgonda was earlier referred to as Neelagiri, the name given by some Rajput rulers and the name was changed to Nallagonda only after its conquest by Allauddin Bahaman Shah, a Bahamani king.

It has a major role in the Telangana Rebellion. Much of the struggle revolves round Nallagonda and Warangal districts alone and later spread to other regions as well. Almost all the villages in the district were involved in this. the movement was led by Andhra Maha Sabha and Communists. Marshall Law was imposed in the Dist. in 1946. Many people were killed by Razakars or by feudal lords goons and Nizam's armies. Some 3000–5000 villages were liberated and self-governing bodies were formed. Lands were distributed among the poor. Many feudal landlords " Jagirdaars " were killed or ripped of their properties. Battles raged between Communists and Razakars (and Nizam's armies ). Finally this ended with Indian Forces "Police Action" and Telangana along with Hyderabad state is merged into Indian Union.

The district's (peoples) part in the rebellion is even immortalized in the poetry of the Movement which were popular then. These were used as a means to enlighten the common people about the revolt and its leaders. one such poem by Bandi Yadagiri (Venkepally Village Nuthankal Mandal), who penned the famous song " బండెనుక బండి కట్టి… ".

Nalgonda District is currently a part of the Red Corridor.[4]

Minerals in the district include Limestone, Black & Color Granites.

Clean drinking water, water supply for irrigation and educational facilities for all are perhaps the most important problems Nalgonda faces right now.

Parada village under Kattangur Mandal was suffering due to drinking water; almost all the villages were supplied with water from Krishna except this village.

In 2006 the Indian government named Nalgonda one of the country's 250 poorest districts (out of a total of 640).[7] It is one of the thirteen districts in Andhra Pradesh currently receiving funds from the Backward Regions Grant Fund Programme (BRGF).[7]

The popular Pochampally Saris and Puttapaka Saris are made here. 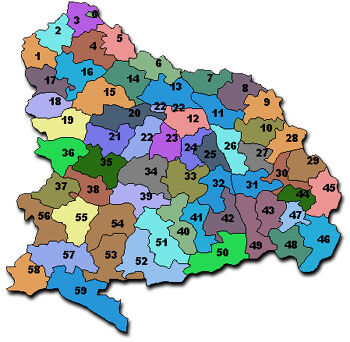 Some of the Places for catching the attention of Tourists in the District are:

Yadagiri Gutta, which is the most devotional place in Nalgonda is located near Bhuvanagiri Town. It is close to Hyderabad, the capital city and the APSRTC runs many buses to the temple town from Mahatma Gandhi Bus Station. The temple draws huge crowds, especially during vacations and on weekends. This is the Place of worship of Lord Laxmi Narasimha Swami.

Bhuvanangiri Fort was built by Tribhuvanamalla Vikramaditya VI on an isolated rock. The Bala Hisar or citadel on the top of the hill gives a bird's eye view of the neighbouring area. The fort is associated with the herioc queen Rudramadevi and her grandson Prataparudra's rule.

PillalaMarri is one of the oldest Lord Shiva temples which is considered to be 1000 years old. Pillalamarri, being the birthplace of the famous Telugu poet Pillamarri Pina Virabhadrudu, is not only historically but also culturally and religiously significant.

One of the famous devotional places in A.P is also in Nalgonda dist.

The Jain Shrine at Kolanupaka village, near Aler town is more than 2000 years old. This holy temple has three holy idols of Lord Adinath, Lord Neminath and ord Mahaveera and 21 other "Theerthankaras". It is very recently renovated by more than 150 artisans from Gujarat and Rajasthan.

A small village on the banks of the Krishna River where several Buddhist structures like monasteries and pillared halls were unearthed and preserved in a museum of the Central Archeological Department.

A village near Nalgonda. There are several ancient temples built under the reign of the Kakatiya, Reddy and Velama kings. There is an archeological museum which has several interesting artifacts.

This is famous for its bridge and also called 'Triveni sangamam'(Confluence) where three rivers Godavari, Krishna and Musi meet.

This village is about 18 km South of Suryapet, on banks of the Musi river, famous for its temples. There are two Ancient temples (Trilingeswara Aalayam (Shivalayam) and Veerabhadreswara Aalayam) in this village, founded by the "Reddy Rajas" in the Kakatiya's era...They got the amazing art and beautiful sculptures carved on the black stone....These two temples are similar to the Warangal's "Thousand pillar temple"...and Pillalamarri Temple. These templeas are famous for Every year SHIVARATHRI 'Jatara' too.

A view of Bhongir Fort

Suryapet Hi-Tech station
Add a photo to this gallery

Template:Cities and towns in Nalgonda district