Wade, Moses, was born July 2, 1792, at Farmersville, Cattaraugus county, New York, the son of Jacob Wade and Sarah Jones. He learned the trade of a dyer and cleaner and also practiced medicine for a number of years. Becoming a convert to "Mormonism," he was baptized April 1, 1837, at Farmersville, New York, and was with the Saints at the time of the exodus from Nauvoo in 1846. Prior to this he had married Sallie Maria Bundy, who was born May 13, 1798, and who bore her husband four children, namely: Mary E., Edward D., Sarah M., and Minerva.

In 1846 he and his family journeyed westward with the rest of the exiled Saints, and having arrived on the Missouri river, he enlisted in Co C of The Mormon Battalion along with his oldest son Edward Davis Wade (1825-1880) and marched together to California. While he was still in California his wife died at Council Bluffs, in January, 1848, and his daughter, Minerva, had married Wm. A. Hickman. Bro. Wade arrived in Utah from California in 1850 and established himself as a broom maker in Salt Lake City, where he spent the remainder of his days. Bro. Wade also married a widow lady, Mrs. Armstrong, of Salt Lake City, who bore him one daughter (Jane). He died in Salt Lake City, Nov. 20, 1869. Mary Kirkbride Armstrong was NOT a widow when Moses married her. 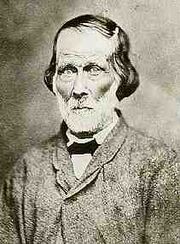