Familypedia
Register
Don't have an account?
Sign In
Advertisement
in: Weaver (surname), Born in 1833, Died in 1893, Migrants from Germany to the United States

Born Ottomar Weber, he immigrated to the U.S. from Bavaria in December 1853 on the ship Admiral, and settled in Hollidaysburg, Penna., where he married a young widow Barbara (Miller) Mayer on 11 Jan. 1854 at St. Patricks Catholic Church, Newry. He became a citizen on 22 Oct. 1860, and by 1862 he had anglicized his name to Morris Weaver.

Morris served in Co. E. 84 Pa. Infantry in the Civil War and was wounded at Kernstown, Virginia, when he was run over by a supply wagon. In 1867 his first wife died of consumption, and he shortly afterward married Barbara E. Rhodes. He and his second wife purchased a home on Franklin St. in Gaysport, 'across the tracks' from Hollidaysburg. Morris died there of pleurisy. His widow survived him by 42 years.

With his first wife Morris was the father of Catherine Weaver(1), Mary Ann Koch Marks, Barbara Downey, Ellen Theresa Ellis, Catherine Weaver(2) and Morris John Weaver. He was also stepfather to Joseph Mayer, who took the name Weaver. With his second wife he was the father of Jennie M. Weaver, Margaret Suckling, Annie Weaver, William Hilary Weaver, George Samuel Weaver, Franklin Jerome Weaver, Rosetha May White, Clara Elizabeth Shaffer and Florence Josephine Hamilton. All lived to adulthood except the two Catherines, Annie and Franklin, and ten of the remaining twelve produced children, eventually leaving Morris over 50 grandchildren, born from 1874 to 1920.

Morris and his first wife were members of St. Mary's Catholic Church in Hollidaysburg. Some years after his second marriage, he joined his wife at the Hollidaysburg Zion Lutheran Church. 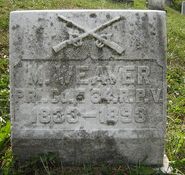