He was baptized at Saint Paul's Roman Catholic Church in Jersey City on November 14, 1886.

Matthew registered for the draft on June 05, 1917. He had blue eyes and brown hair, was 68 inches tall and had a medium build. He was living at 16 West 10th Street in Bayonne. He was working as a tallyman at James Thompson and Company in Bayonne. 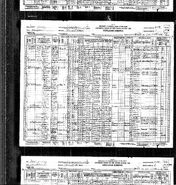 1930 census
Add a photo to this gallery
Retrieved from "https://familypedia.wikia.org/wiki/Matthew_John_Gelchion_I_(1886-1966)?oldid=684255"
Community content is available under CC-BY-SA unless otherwise noted.