Mary Chilton Winslow - a daughter that was left an orphan at Plymouth, survived and later married John Winslow, brother of Edward Winslow. She is believed to be the first woman to set foot on Plymouth Rock. Later moved to Boston, where she died before 1-May-1679.

Mary Chilton was baptized on May 31, 1606 in Sandwich, Kent, England and was the daughter of the Mayflower passenger, James Chilton. Mary Chilton's mother's name has been listed as "Susannah, possibly Furner" in many places. She is listed by William Bradford as "Mrs. Chilton" or "James Chilton's wife." He may have never known her given name.[1] At the age of thirteen, Mary Chilton accompanied her parents on the voyage to Plymouth. Her father, age sixty-four, was the oldest passenger on the Mayflower.[2]

Her father died on December 18, 1620 and her mother died six weeks later on January 21, 1621, both shortly after arriving at Plymouth Rock, both of "the first infection of the disease" reportedly by Governor William Bradford in 1650. Once orphaned, she may have become the ward of Myles Standish or John Alden. Chilton was given three shares in the land division of 1623, one for herself and one each for her deceased parents. Her property was situated between those of Standish and John Howland.

She married John Winslow (possibly on October 12, 1624) and thus became the sister-in-law of Mayflower passenger Edward Winslow. They had ten children: John, Susannah, Mary, Edward, Sarah, Samuel, Joseph, Isaac, an unnamed child who probably died in infancy, and Benjamin. All but Benjamin married, and Benjamin's birth is the only one listed in the records of Plymouth colony.

The family moved to Boston some time after the birth of Benjamin in 1653. There John Winslow is said to have prospered as a merchant.

She made out a will on July 31, 1676 (one of two female passengers from the Mayflower who did so, Elizabeth Tilley being the other) and died before May 1, 1679 in Boston. Her gravestone is at Kings Chapel Burying Ground in Boston.

National Monument to the Forefathers, commemorates the Mayflower Pilgrims, (including this person) who came to Plymouth Colony in 1620 on the Mayflower. Dedicated on August 1, 1889, it is thought to be the world's largest solid granite monument. Located on an 11 acre hilltop site on Allerton Street in Plymouth, Massachusetts. 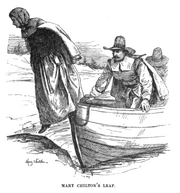