For counties with a similar name, see Marion County (disambiguation).

Marion County (standard abbreviation: MN) is a county located in the U.S. state of Kansas. As of the 2010 census, the county population was 12,660.[1] The county seat is Marion. The county was named in honor of Francis Marion, a Brigadier General of the American Revolutionary War, known as the "Swamp Fox".[2]

For millennia, the land that is currently Kansas was inhabited by Native Americans. In 1803, most of modern Kansas was secured by the United States as part of the Louisiana Purchase.

In 1806, Zebulon Pike led the Pike expedition westward from St Louis, Missouri, of which part of their journey followed the Cottonwood River through Marion County near the current towns of Florence, Marion, Durham.[3]

In 1855, Marion County was founded. The city of Marion Centre was founded in 1860, became the county seat, and later the city name was shortened to Marion.

The first settlers in Marion County located on Doyle Creek, near the present site of Florence. They were Moses Shane, who came in 1858, and whose death the next year was the first in the county; Patrick Doyle, in 1859, for whom Doyle Creek and Township were named, and a family by the name of Welsh, in which occurred the first birth in the county in August 1859.

Originally, Marion County covered more than a third of the area of Kansas, including all the territory in the state south and west of the present northern and eastern lines of the county. The original location of the county was fixed by legislative act in 1860. It comprised less than the present area. The original boundaries were altered by an increase of territory on the west and a decrease on the south. In 1863, the legislature by special act fixed the boundaries to include all of southwestern Kansas. In June of that year, on petition of the citizens of the county, the governor restored the previous boundaries and ordered a separate organization of the county.[4] The south-eastern border one mile "notch" with Chase County was established under unusual circumstances. A murder had occurred and Marion County didn't want to have the trial, so a section one mile wide and eighteen miles long was ceded to Chase County to ensure the murder had occurred there.[5] The one mile strip of land remains in Chase County to this day.

The state of Kansas granted the Atchison and Topeka Railroad three million acres (12,000 km²) of land if it would build a continuous line to the western border of the state within ten years (March 1, 1873). In 1871, the railroad pushed westward from Emporia through Florence, Horners, and Peabody towards Newton, and got title to the land in 1873.[6] According to the original land grant, the railroad was to receive every odd numbered section for ten miles (16 km) on each side of its track, but in eastern Kansas which was pretty well settled, much of this land wasn't available. The law therefore gave the railroad what was called "in lieu" lands further west. Eventually this worked out to be half the land on a strip twenty miles (32 km) on each side of its track from Emporia nearly out to Kinsley, which meant that most of Marion County fell in this strip.[7]

In 1877, the Florence, El Dorado, and Walnut Valley Railroad Company built a branch line from Florence to El Dorado, in 1881 it was extended to Douglass, and later to Arkansas City.[8] The line was leased and operated by the Atchison, Topeka and Santa Fe Railway. The line from Florence to El Dorado was abandoned in 1942.[9] The original branch line connected Florence, Burns, De Graff, El Dorado, Augusta, Douglass, Rock, Akron, Winfield, Arkansas City.

In 1887, Atchison, Topeka and Santa Fe Railway built a branch line from Neva (3 miles west of Strong City) to Superior, Nebraska. This branch line connected Strong City, Neva, Rockland, Diamond Springs, Burdick, Lost Springs, Jacobs, Hope, Navarre, Enterprise, Abilene, Talmage, Manchester, Longford, Oak Hill, Miltonvale, Aurora, Huscher, Concordia, Kackley, Courtland, Webber, Superior. At some point, the line from Neva to Lost Springs was pulled but the right of way has not been abandoned. This branch line was originally called "Strong City and Superior line" but later the name was shortened to the "Strong City line". The railway is connected via a switch to allow north-bound "Rock Island" traffic to connect onto the north-west-bound "Santa Fe" tracks. This is the only way for the Santa Fe traffic to travel north-west after removing the tracks to Neva.

As early as 1875, city leaders of Marion held a meeting to consider a branch railroad from Florence. In 1878, Atchison, Topeka and Santa Fe Railway and parties from Marion County and McPherson County chartered the Marion and McPherson Railway Company.[8] In 1879, a branch line was built from Florence to McPherson, in 1880 it was extended to Lyons, in 1881 it was extended to Ellinwood.[10] The line was leased and operated by the Atchison, Topeka and Santa Fe Railway. The line from Florence to Marion, was abandoned in 1968.[11] In 1992, the line from Marion to McPherson was sold to Central Kansas Railway. In 1993, after heavy flood damage, the line from Marion to McPherson was abandoned. The original branch line connected Florence, Oursler, Marion, Canada, Hillsboro, Lehigh, Canton, Galva, McPherson, Conway, Windom, Little River, Mitchell, Lyons, Chase, Ellinwood.

In 1996, the Atchison, Topeka and Santa Fe Railway merged with Burlington Northern Railroad and renamed to the current BNSF Railway. Most locals still refer to this railroad as the "Santa Fe".

The "Rock Island" has switches in Peabody and Lost Springs to allow connections to the crossing "Santa Fe" railroad in each city.

The National Old Trails Road, also known as the Ocean-to-Ocean Highway, was established in 1912, and was routed through Lehigh, Hillsboro, Marion, Lost Springs.

In 2010, the Keystone-Cushing Pipeline (Phase II) was constructed north to south through Marion County with much controversy over road damage, tax exemption, and environmental concerns (if a leak ever occurs).[15][16][17][18]

Following amendment to the Kansas Constitution in 1986, the county remained a prohibition, or "dry", county until 2004, when voters approved the sale of alcoholic liquor by the individual drink with a 30% food sales requirement.[19]

Marion County is located in the Great Plains, and the eastern part of the county is part of the Flint Hills.[21][22]

Marion County contained some oil boom towns and cattle loading pens at railroads that have since been abandoned.

Marion County is divided into twenty-four townships. The cities of Florence, Hillsboro, and Marion are considered governmentally independent and are excluded from the census figures for the townships. In the following table, the population center is the largest city (or cities) included in that township's population total, if it is of a significant size. 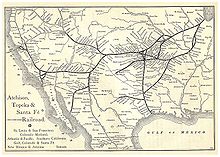 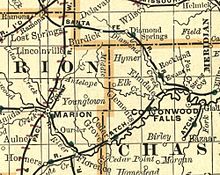 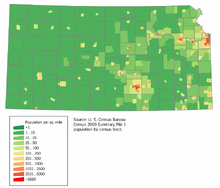 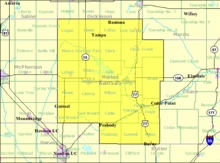 2010 map of Marion County with Township Boundaries.
Add a photo to this gallery