Edit Facts
Lyndon Baines Johnson, was the thirty-sixth President of the United States (1963–1969). Johnson served a long career in the U.S. Congress, and in 1960 was selected by then-Presidential candidate John F. Kennedy to be his running-mate. Johnson became the thirty-seventh Vice President, and in 1963, he United States presidential line of succession to the presidency following John F. Kennedy assassination. He was a major leader of the History of the United States Democratic Party and as President was responsible for designing his Great Society, comprising liberal legislation including American Civil Rights Movement (1955–1968), Medicare (United States) (health care for the elderly), Medicaid (health care for the poor), aid to education, and a "War on Poverty". Simultaneously, he escalated the American involvement in the Vietnam War, from 16,000 American soldiers in 1963 to 550,000 in early 1968. 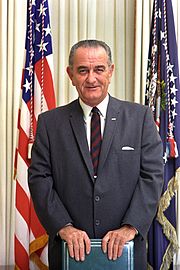