Louis Julius Lindauer (1838-1915) aka Lewis Lindauer. He worked at an "exchange" and as a "broker" for lottery tickets which were illegal. He also involved in the legal sale of alcohol. He also was a cigar store owner with Lindauer and Company, Tobacco with his brothers in Manhattan and Jersey City and Hoboken. (b. August 1838; Pennsylvania, USA - d. January 19, 1915; 604 West 115th Street, Manhattan, New York City, New York County, New York, USA)

By 1850 Oscar Arthur Moritz Lindauer moved the family to Manhattan and they appear on the US Census of that year. In the 1859-1861 New York City Directory Louis is listed with his occupation as "liquor" and he is either living or working at the corner of Fourth Street and Thompson Street. In 1866 Louis was listed in the Manhattan City Directory as living at 174 Mott Street and his occupation was listed as "beer". He was working at 446 Broome Street.

Together they had the following children. Some of these children are duplicated:

Other children may belong to Louis and be buried in Cypress Hills Cemetery in Brooklyn in the Lindauer Family Plot but their parentage must be confirmed by a birth or death certificate. ^ These women may have married and these lines may be extant. They had eleven children and some must have lived to be adults and married and had children.

In 1870 Louis and Mary were living in Manhattan with Minnie, their first child and Louis was working as a "exchange broker". There is a second entry for Louis Lindauer and his brother, Charles Lindauer living at home with their mother, Sophia. The double entries in the 1870 United States Census are confusing and there may be two sets of Lindauers in Manhattan with the same name, or if they are the same person, they may be listed at two different residences. Louis appears in the 1880 United States Census living in Hoboken, New Jersey with the name transcribed as "Louis Lindowen". He is working selling cigars retail. The record was found on Friday, November 26, 2004, by searching for all the people named "Mary", born in Massachusetts between 1840 and 1844, living in New York or New Jersey. In 1880 Louis is listed in the New York City Directory as selling "segars" (cigars) at 87 Fourth Avenue and living at 299 West Houston Street. In 1880-1881 Louis and his two brothers are also listed in the Hoboken and Jersey City Directory as a "cigar manufacturer".

In 1888 Louis' wife, Mary Sheehan, died of tuberculosis and in 1890 the New York City Directory lists Louis and Charles F. Lindauer, his brother, working at 32 University Place in Manhattan in the business of "liquors". Louis is also listed as living at 295 West Houston Street. In 1900 Louis was living at 108 Washington Place in Manhattan, New York City with Lulu, Grace, Sofie and Adeline.

Louis died On January 19, 1915 of locomotor ataxia in Manhattan, and his death certificate number was number "2296". Locomotor ataxia is usually secondary to tabes dorsalis a symptom of an untreated syphilis infection.

Charles Edward Ensko II (1921-2004) said on July 26, 2003: "My grandmother played the piano until she got Alzheimers. She had cousins called Addy Lindauer, Minny Lindauer and Grace Lindauer that lived in Washington Heights by us. In the 1930s they would come over to our house. Grace Lindauer was married and had a child that died. He fell down a flight of stairs in the large house in Rye in Westchester County. The house in Rye was very big on a couple of acres."

He was buried in the Lindauer family plot in Cypress Hills Cemetery in Brooklyn. The grave is marked by two tombstones, even though 14 people are interred there. The tombstones are for: Stanley Marlton Massey (1895-1902); and William Arthur Ensko II (1850-1889). All buried there are: 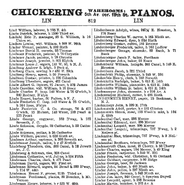 1880 US census selling cigars at retail 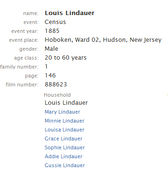 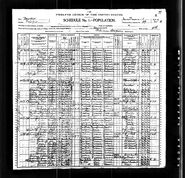 1900 US census
Community content is available under CC-BY-SA unless otherwise noted.
Advertisement