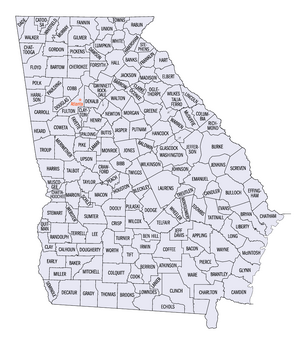 The U.S. State of Georgia is divided into 159 counties. Under the Georgia State Constitution, all of its counties are granted home rule to deal with problems that are purely local in nature. Also, seven consolidated city-counties have been established in Georgia: Athens -- Clarke County, Augusta -- Richmond County, Columbus -- Muscogee County, Georgetown -- Quitman County, Statenville -- Echols County, Macon—Bibb County, and Cusseta -- Chattahoochee County.

Georgia has the second largest number of counties of any state in the United States, following Texas, which has 254 counties (see List of counties in Texas).[1] One traditional reasoning for the creation and location of so many counties in Georgia was that a country farmer, rancher, or lumberman, should be able to travel to the legal county seat town or city, and then back home, in one day on horseback or via wagon. However, about 25 counties in Georgia were created in the first quarter of the 20th century, after the use of the railroad, automobile, truck, and bus had become possible. These 25 or so counties are generally thought of as having been created because of political reasons. The last new county to be established in Georgia was Peach County, established in 1924.

The proliferation of counties in Georgia led to multiple state constitutional amendments attempting to establish a limit on the number of counties in the state. The most recent such amendment, ratified in 1945, limited the number to 159 counties, although there had been 161 counties from 1924 to 1931. In a very rare consolidation of counties, both Campbell County and Milton County were annexed into Fulton County in 1932 as a financial move during the Great Depression, since those two county governments were nearly bankrupt.

Fulton County contains Atlanta, and it was thought that tax revenues from Atlanta and its suburbs would help to support the rural areas of the discarded counties, which had very little tax income of their own—mostly from property taxes on farms and forests, which did not amount to much.

Changed names of counties in GeorgiaEdit

In addition, there was a previous Walton county in Georgia, which was actually located in what is now western North Carolina. A brief skirmish, the so-called Walton War, was fought between North Carolina and Georgia in 1810, before Georgia relinquished its claim on that area after the 1811 survey of Ellicott Rock.

Squidbillies, an animated series found on the Adult Swim cable network, features a family of developmentally challenged cephalopods living in Dougal County (obviously a reference to Douglas County) in the hills of north Georgia.

The TV series and movie The Dukes of Hazzard takes place in the fictitious county of Hazzard County, Georgia.

The TV series The Following Season 1 Episode 7 entitled "Let Me Go" mentions moving Joe Carroll to the Jesup County Federal Correctional Facility. Although there is a Jesup Georgia the county is Wayne.

The TV series The Misadventures of Sheriff Lobo takes place in the ficitious county of Orly County, Georgia.

Retrieved from "https://familypedia.wikia.org/wiki/List_of_counties_in_Georgia_(U.S._state)?oldid=1063395"
Community content is available under CC-BY-SA unless otherwise noted.