As early as October 1874, the United States Post Office recognized common abbreviations for states and territories. However, abbreviations were accepted only because of their popularity; the Post Office preferred all names spelled out in full to avoid confusion.[1]

The traditional abbreviations for U.S. states and territories, widely used in mailing addresses prior to the introduction of two-letter U.S. postal abbreviations, are still commonly used for other purposes (such as legal citation), and are still recognized (though discouraged) by the Postal Service.[2]

The modern two-letter abbreviated codes for the states and territories originated during the Post Office's introduction of ZIP codes in 1963. The purpose was to make room for the ZIP codes in the address, rather than to standardize state abbreviations per se.[1]

Since 1963, only one state abbreviation has been changed. Originally Nebraska was shortened to "NB," but this was changed to "NE" in November 1969 to avoid confusion with New Brunswick in Canada.[1]

Prior to 1987, when the U.S. Secretary of Commerce approved the two-letter codes for use in government documents,[4] the United States Government Printing Office (GPO) suggested their own set of abbreviations, with some states being left unabbreviated. Today, the GPO supports United States Postal Service standard.[5]

The Associated Press Stylebook, the usage guide for most United States newspapers, counsels the use of abbreviations for most state names, when appended to a city name (for example, "Santa Ana, Calif."). AP suggests spelling out "Alaska," "Hawaii," and all state names with five or fewer letters; and, unlike the old GPO recommendations, AP suggests spelling out the names of all non-state territories, with the exception of the District of Columbia (D.C.). Legal citation manuals, such as The Bluebook and The ALWD Citation Manual, typically use these "traditional abbreviations" as well. 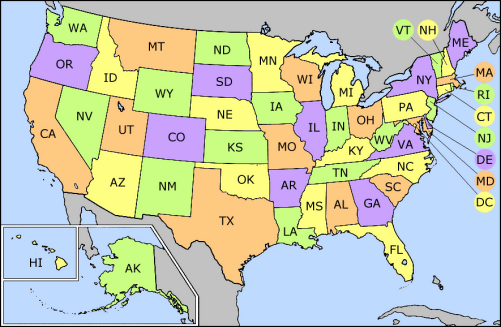 The United States Postal Service has established a set of uppercase abbreviations to help process mail with optical character recognition and other automated equipment.[9] There are also official USPS abbreviations for other parts of the address, such as street designators (street, avenue, road, etc.).

The postal abbreviation is the same as ISO 3166-2 subdivision code for all fifty states.

These codes do not overlap with the thirteen Canadian subnational postal abbreviations. The code for Nebraska changed from NB to NE in November 1969 to avoid a conflict with New Brunswick.[1]

Other abbreviations and codes[edit | edit source]

The Federal Information Processing Standard establishes numeric and alphabetic state codes for each state and for many outlying areas. The FIPS numeric code is marked 'FIPS' on the table above. The FIPS alphabetic state code is the same as the USPS code except for U.S. Minor Outlying Islands which have a FIPS code (UM) but no USPS code, and the U.S. Military Mail locations which have USPS codes (AA, AE, AP) but no FIPS code.

The U.S. Coast Guard uses a set of 2-letter prefixes for vessel numbers,[12] marked (USCG) on the large table above. The other 39 states and the District of Columbia have the same USPS and USCG abbreviations. USCG prefixes have also been established for five outlying territories, all of which are listed above, though they differ from the USPS code only in the case of the Mariana Islands. The small table below shows the 11 states that are different plus the Mariana Islands.

Retrieved from "https://familypedia.wikia.org/wiki/List_of_U.S._state_abbreviations?oldid=783331"
Community content is available under CC-BY-SA unless otherwise noted.