DYS454 is the least diverse, and multi-copy marker DYS464 is the most diverse Y-STR marker.

The location on the Y chromosome of numbered DYS markers can be roughly given with cytogenetic localization. For example DYS449 is located at Yp11.2 - meaning the Y chromosome, petit arm, band 1, sub-band 1, sub-sub-band 2 - DYS449[1]. For a nearly complete map of the position of DYS and DYF markers have a look at Ymap from Family Tree DNA.

Mutation rates are those per generation, as estimated in Chandler (2006)[2]. The quoted estimated errors are typically +/- 15-20%. Alternative estimates from observed pedigrees are also available for some markers[3].

It appears that some trinucleotide markers may have much higher mutation rates at some repeat lengths than at others. For example, variation of the trinucleotide DYS 388 is generally very slow in most haplogroups, when it takes the values 11-13. But there appears to be much greater variation and more rapid mutation in Haplogroup J, where it typically has values 14-18. Similarly the trinucleotide DYS 392 is reported to be "fast" in haplogroups N and Q, where it takes values 14-16 which are rare in other groups.[4] 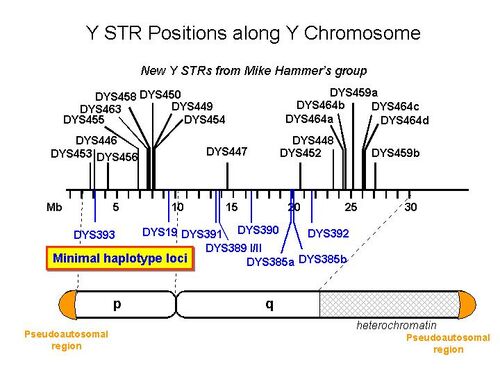