Lovina was the mother of John and the daughter of Obadiah and Jenuma (Tolls) Prat. Born August 6, 1787, in New York, she married Losee and they had three children, Jenuma, Sarah, and John. Losee died at thirty-four. John named Lucy and they lived at the old family home with John's mother until they all joined the Mormon Church and moved west with two daughters. His Aunt Jemima is mentioned in Parley P. Pratts autobiography as a gentle, loving person. Lavinia, though not expected to live long in New York crossed the plains in 1847 and died at age ninety-one in SLC on May 18, 1878.

Lovina Pratt Van Cott was born on August 6, 1787, in Canaan, New York. She was the eighth child born to Obadiah and Jemima (Tolls) Pratt. She usually dropped the second name and her first name has been spelled various ways: Lovinia, Lavinia, Lavina, etc. Lovina and her family lived on a farm at New Lebanon, New York, in Columbia County, not far from present day Albany. Lovina’s parents moved to Dutchess in Washington County, New York, in their later years. Her father was a descendant of Lt. William Pratt who helped settle Saybrook, Connecticut in the early seventeenth century. Her mother was a descendant of Daniel Tolles of Wales. Little is known or written of Lovina’s early life. Apparently her childhood was one of normal growth for that period of time. The Revolutionary War had ended and the colonies-now states-were absorbed in the task of building a new nation. George Washington, John Adams, and Thomas Jefferson completed their terms as president of the republic. Lovina Pratt married Losee Van Cott about the time that James Madison became the fourth president and the War of 1812 hostilities began. They made their home in Canaan, Columbia County, New York. She bore two daughters, Jemima and Sarah, and one son, John Losee. Losee died after a seven-year illness when the oldest child was only 11 years old. His son John was almost 10 years of age and Sarah Ann was seven years old. It appears that relatives and neighbors had helped with the farm work for several years before his death and would continue to do so until his son John Losee was old enough and big enough to handle the work by himself.

Her son John was taught about the restored gospel of Jesus Christ by his cousin, Parley Parker Pratt (1807-1857), between they 1830-1833. He would join the Mormon Church and become a prominent early pioneer leader therein. The widow Lovina would followed her son to Utah and would live many years with his family there.

Company Information: 185 individuals and 75 wagons were in the company when it began its journey from the outfitting post on the Elkhorn River about 27 miles west of Winter Quarters, Nebraska.

Show Lavina living with the family of her famous son in the Salt Lake Valley. 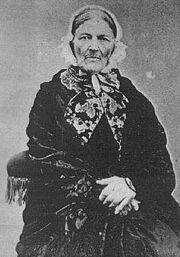