Laubach is a town of approximately 10,000 people in the Giessen District of Hesse, Germany. Laubach is known as a Luftkurort, a climatic health resort. It is situated 23 kilometres (14 mi) east of Gießen. Surrounding Laubach are the towns of Hungen, Grünberg, Schotten and Lich.

The dense Laubach Woods spread into the foothills of the Vogelsberg Mountains. With its many historic and colorful half-timbered (fachwerk) buildings, Laubach is an area of interest to tourists.

The main point of attraction is the castle belonging to the Count Solms-Laubach family. The castle was built in the thirteenth century and expanded over the years. The Solms castle has one of the largest private libraries in Europe, with over 120,000 titles. An original Gutenberg Bible, on display in the Johann Gutenberg Museum in Mainz, came from this private collection. The castle grounds include a huge park with a swan lake, open to the public.

The city's Evangelical Lutheran Church, formerly named St. Maria, has a Baroque organ. The oldest part of the church was built in the twelfth century. It was renovated in the eighteenth century.

The former district courthouse (Amtsgericht), the city hall, and the Heimat Museum are together on the main street of Friedrichstrasse. The courthouse is now a residence for senior citizens.

The Heimat Museum–Fridericianum is the local history museum, originally built near the town of Gonterskirchen in 1750 by Count August Solms-Laubach. The building was moved to its present location in 1832 and served as a school before it became a museum. The museum is currently updating its exhibits, among which will be a permanent exhibit of the diary of city resident Friedrich Kellner.

Kellner was Laubach's chief justice inspector during WWII and wrote a 10-volume diary about the misdeeds of the Nazis, later published as a book, My Opposition (German: Mein Widerstand). He became deputy mayor, first town councilman, and chairman of the regional branch of the Social Democratics. A Canadian documentary about Kellner was filmed on location in Laubach.

Klipstein grew up in Laubach and Belgium, spending his academic years in France and Spain, where he did special studies in Velázquez. In 1909 he settled in Laubach with his wife, the writer Edith Blass.

Laubach in the media Edit 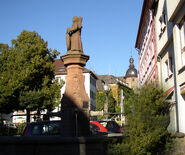 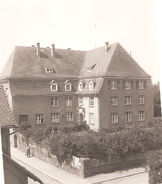 The ruined church "St. Valentin" of the deserted village Ruthardshausen, July 2007
Add a photo to this gallery

Template:Towns and municipalities in Gießen district

Retrieved from "https://familypedia.wikia.org/wiki/Laubach?oldid=988505"
Community content is available under CC-BY-SA unless otherwise noted.